A woman who collects sarees as a passion, this Sreelekha Mitra starrer looks like an interesting watch. 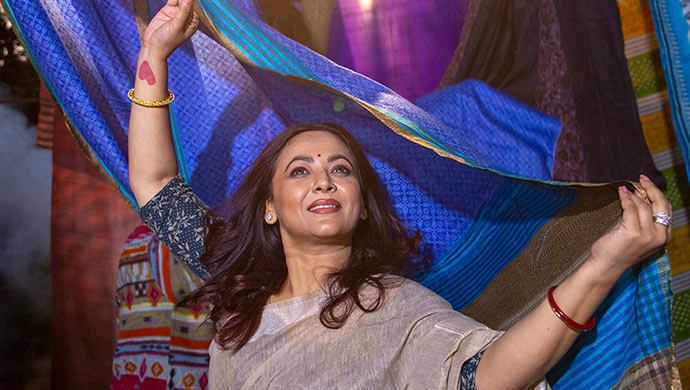 There is no Bengali woman who doesn’t love the saree. From Dhakai to Taant and from Baluchari to Benarasi, a Bengali’s woman’s wardrobe is incomplete without various kinds of sarees not just from all over Bengal, but from across India. But what happens when you are a little too obsessed with collecting sarees, so much so that it becomes your love and passion? The upcoming ZEE5 Original film Sudakshinar Saree, to be released on January 17, has the answers to that. Watch the trailer of this latest Bengali film starring Sreelekha Mitra and Badshah Moitra.

Directed by Abhijit Guha and Sudeshna Roy, the movie focuses on the life of Sudakshina, a homemaker who is so obsessed with collecting sarees that her wardrobes are overflowing with the six-yard drape. Sudakshina is an ideal housewife who balances her roles of mother, daughter-in-law, aunt and sister-in-law flawlessly. Just like many women in our society, she gives up on her dreams of becoming a journalist and ends up becoming a housewife after marrying Prateek. All her dreams are crushed as her marriage is fixed at the tender age of 20. Due to this sudden change, Sudakshina finds herself developing a new passion – collecting sarees. She does this in order to save herself from the monotony of everyday routine.

However, Prateek and his family are not too happy with her ‘passion’ and ridicule her often. But a sudden twist rekindles Sudakshina’s ambitions, leading her to take up her passion seriously. How she manages to convince everyone and continues to balance her life is what the movie is all about.

Written by Padmanava Dasgupta, Sudakshinar Saree talks of the life of a woman who has to forget her dreams after her marriage. While focusing on how Sudakshina solves her daily challenges, the filmmakers have found a way to motivate other women who also had to leave or conceal their wishes from their family due to the thought of being ridiculed.

Stay tuned for this intriguing film.

Watch The ZEE5 Original Series Karkat Rogue, A Thriller That Highlights The Dark Underbelly Of The Medical World