Your coming month is sorted as we bring you diverse new shows and movies like Basu Paribar and Witch At Court. Check out! 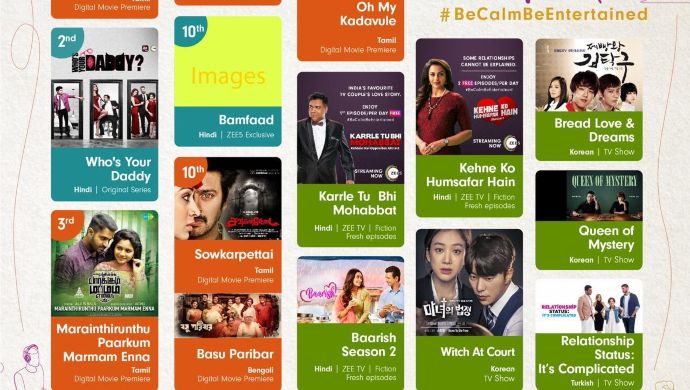 Just as we saw fresh additions to the ZEE5 platform in March like the glamorous Zee Bangla Sonar Sansar Award 2020 celebrating 20 years of Zee Bangla in style, as well as State Of Siege: 26/11, the series based on the 26/11 attacks in Mumbai, April is all set to launch a whole new collection of diverse offerings in different languages. Here is a preview of what’s to come!

April 2020 has several surprises in store for you. Foreign language enthusiasts will be thrilled to know that there will be three new TV shows in Korean– Witch At Court, Bread Love & Dreams and Queen of Mystery. A Turkish show called Relationship Status: It’s Complicated will also be available. New ZEE5 Originals to join the list are Who’s Your Daddy in Hindi, and an exclusive title called Bamfaad, also in Hindi. Several new movies in Tamil will also be launched including Kalavani Mappillai, Naan Sirithaal and Sawkarpettai.

The Bengali film that we just can’t wait for is Basu Paribar. Directed by Suman Ghosh, this star-studded blockbuster will be streaming from April 10.

The grand cast includes veteran actors Soumitra Chatterjee, Aparna Sen, Rituparna Sengupta, Jisshu Sengupta, as well as the lovely Sreenanda Shankar. Set in the stately ancestral family home of the characters, the film is about a retired barrister (played by Soumitra) and his wife (Aparna) who are preparing to celebrate their 50th wedding anniversary. Their children and extended family members are arriving from different corners of the world to attend this landmark event.

As they start coming in and gathering under the same roof, the differences in their personalities and unresolved issues from the past emerge and start causing friction. Watch the drama that unfolds, as it is sure to keep you enthralled and engaged with the film. The stellar performances will further heighten your viewing experience, as will the picturesque cinematography and the nostalgia of the old world charm of ancestral houses.

Are you excited to watch Basu Paribar? Let us know your thoughts in the comments below!

Dada Is Right. Here Are 4 Reasons Why Rest Is Important For You

Monday Motivation: Jisshu Sengupta Has A Powerful Message For His Daughter

Birthday Special: 5 Lesser-Known Facts About Ritwick Chakraborty That Will Put You In Awe