Basu Poribar: Get Ready For This Film By Suman Ghosh To Light Up Your Screens At Home

Here's why you should wait to watch the Soumitra Chatterjee and Aparna Sen starrer launching on May 5. Details inside! 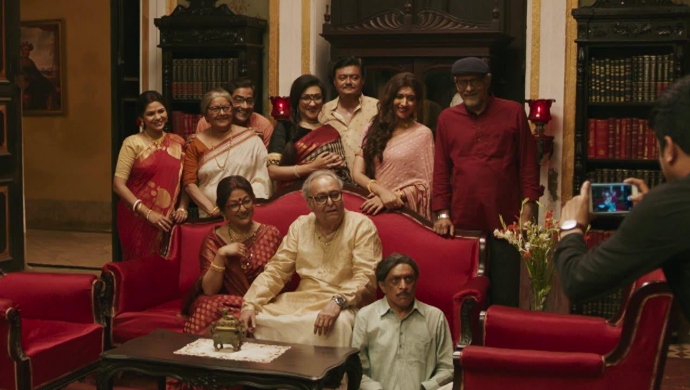 Basu Poribar, a star-studded Bengali blockbuster directed by Suman Ghosh, is all set to grace the ZEE5 streaming platform for your viewing pleasure. Released in 2019, this film is meant for the entire family, so you can enjoy watching it at home with everyone from May 5 onwards!

Check out the trailer of the movie right here:

The grand cast of Basu Poribar includes the veteran actors Soumitra Chatterjee, Aparna Sen, Rituparna Sengupta, Jisshu Sengupta, Sawsata Chatterjee and Paran Bandopadhyay, as well as the lovely Sreenanda Shankar. Suman, the award-winning director of the film, has previously made movies like Podokkhep and Nobel Chor, both of which have earned him national accolades.

Basu Poribar is set in the large ancestral family home of the characters, and the plot revolves around a retired barrister (played by Soumitra) and his wife (Aparna) who are preparing to celebrate their 50th wedding anniversary. Their children and extended family members are arriving from different corners of the world to attend this landmark event, and the air is abuzz with excitement.

As the members of the family start trickling in and gathering all together under the same roof, the differences in their personalities and unresolved issues from the past start emerging and causing friction between them. What happens next? Watch the drama that unfolds, as it is sure to keep you intrigued and engaged throughout the film. The stellar performances by the actors enhance the impact that the film has on one. You will also be bound to love the beautiful cinematography and the nostalgia evoked by the old world charm of the house that most of the movie has been shot in, which is replete with history and character.

Are you excited to watch Basu Poribar? Let us know your thoughts in the comments below!

What’s Cooking? 6 Of Your Favourite Tollywood Actors Who Are Ace Chefs At…

Watch Chaya O Chhobi, an intriguing film where the lead actress of a movie that is being shot mysteriously disappears.