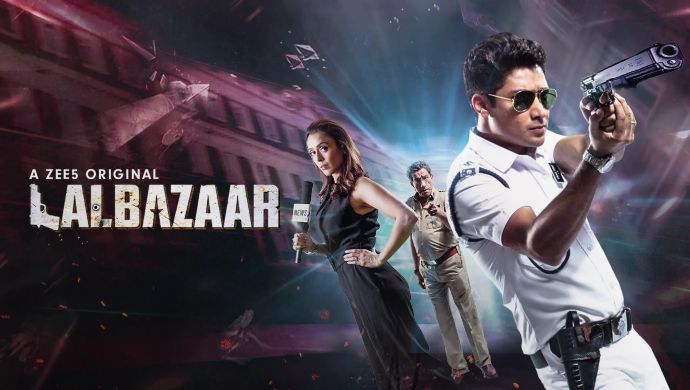 Lalbazaar, the latest Original crime series that is coming soon on the ZEE5 platform, has just released a slick new motion poster which releases on June. The series promises to be an intensely thrilling one, and is based on the lives and activities of the officers working in the homicide department of the police headquarters in Lalbazaar, Kolkata.

Watch the uncensored promo for Lalbazaar below:

Starring a slew of popular actors like Kaushik Sen, Sabyasachi Chakraborty, Gaurav Chakrabarty and Sauraseni Maitra, Lalbazaar is directed by Sayantan Ghosal, the same director who made Satyanweshi Byomkesh, the detective film based on the classic sleuth, Byomkesh Bakshi.

Check out the new poster here:

The poster features actor Gaurav in the foreground, dressed in his white police uniform and wielding a pistol. He is seen to be armed and clearly in action, with a look of immense concentration on his face. Actor Hrishita Bhatt, who plays a news reporter in the series, is seen in the background behind him, followed by Sabyasachi, who plays a senior member of Lalbazaar’s police department. A series of gunshots rings out in the poster, with suspenseful music playing through it that further heightens the drama and action.

We can’t wait for Lalbazaar to grace our screens for several reasons. If you are a fan of crime, mystery and plenty of chilling trills, the new Original will keep you riveted in it with its fast-paced storyline, which is packed with action. It is definitely not for the faint of heart though, with its gripping and very realistic portrayal of criminal cases that take place in the heart of Kolkata’s dark underworld. The police officers investigate brutal murder cases that have been committed in some of the most gory and visceral ways. We are taken straight into the seedy underbelly of a world with no scruples or morals, and are introduced to characters who hide morbid secrets. However, we also get an insight into the lives and minds of the policemen who are in charge in Lalbazaar, and get a chance to see what makes them tick as individuals, rather than mere figures of authority in uniform.

How excited are you to watch Lalbazaar? Let us know with your comment in the section below.

Catch Up With The Latest Episode Of Kaali Season 1 On ZEE5 Before The New Season Is Out.