A vegetarian Tamil Brahmin. A non-vegetarian Bengali from Siliguri. What happens when they share a house? Watch this laugh riot to find out. 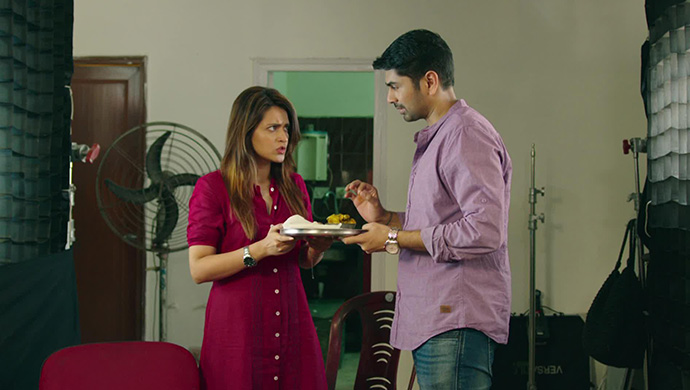 A vegetarian Tamil Brahmin boy. A vehemently non-vegetarian Bengali girl. An excellent cook. A cooking show director who can barely make instant noodles to survive. What happens when such opposites not only meet, but also share an apartment? A recipe of disaster? Well, that’s what you can find out when you watch ZEE5 Original film Filter Coffee Liquor Chaa. Starring Usha Uthup, Priyanka Sarkar and Nishan Nanaiah in the lead roles, Filter Coffee Liquor Chaa, directed by Debarati Gupta, is a cute rom-com you will surely enjoy.

Himeli (played by Priyanka), from Siliguri, came to Kolkata to become a filmmaker. Instead, she landed up becoming a cookery show director with falling TRPs. Meanwhile, her landlord rents out the other room in the apartment to Subramanium (played by Nishan), a Tamil Brahmin for who cooking is passion but he became a number cruncher in a corporate due to pressure from his father. A pure non-vegetarian who loves her liquor chaa, Himeli is appalled by the smell of karipata and filter coffee and the sound of ghontaa in the apartment. Subramanium too, pukes at the sight of chicken bones. It’s like a war of two states initially.

However, they slowly make their peace. Himeli finds out that Subbu is a good cook and even has a popular YouTube channel. They team up and Subbu soon becomes a part of her cookery show and the TRPs shoot up. Subbu starts doing a fusion of Bengali and Tamil dishes. Gradually, Himeli and Subbu become friends. And then Subbu reveals his feelings for her and tries to kiss Himeli, who immediately withdraws.

Loved Watching Thai Curry? How About Trying These Recipes Of The Dish?

Have Been Attracted To A Few Pretty Bengali Ladies From Kolkata: Chandan Roy…

Humiliated, Subbu leaves an apology note and leaves the house the next morning and even applies successfully for a transfer to Bangalore. Himeli tries to contact him but to no avail. One fine day, Subbu’s amma (played by Usha Uthup) comes to Kolkata to give Subbu a surprise. Himeli can’t bring herself to tell her that Subbu is gone.

What happens next? Will she be able to locate her? Watch the movie to find out. Want to watch a love story which revolves around food? Watch Suhasini Muley, Jayant Kripalani and Chiranjeet in Daawat-E-Biryani, on ZEE5.

A Thriller Is For Every Mood. Binge Watch Prosenjit In Drishtikone. Now Streaming On ZEE5

Getting A Lot Of Mails From Rani Rashmoni Fans For Bhalobashar Shohor: Gourab Chatterjee