Don’t Have Inhibitions. Once The Camera Is On, I Can Do Anything, Says Saurav Das

The Bhalobashar Shohor – Kolkatar Kobitara actor talks about kissing Gourab Chatterjee on screen, being a Pointer and more. Read on. 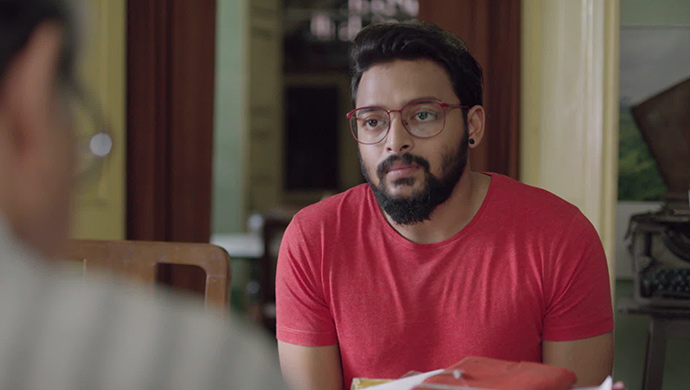 Not every love story follows the known pattern. Some love stories are brave and break the clutter. The Sudeshna Roy and Abhijit Guha directed ZEE5 Original film Bhalobashar Shohor- Kolkatar Kobitara is one such. It is the story of Mallar (played by Saurav Das) and Angshuman (played by Gourab Chatterjee), who are in love with each other. But Mallar’s conservative family doesn’t know about their relationship. In the meanwhile, his sister Malini (played by Ishaa Saha), falls in love with Angshuman. What happens to their love story? Watch this latest Bengali film to find out. In the meantime, we caught up with Mallar aka Batanagar boy Saurav Das about playing an LGBT character and kissing on screen, dating in Kolkata, South Point shenanigans and more. Read on.

Q. What made you decide to do Bhalobashar Shohor – Kolkatar Kobitara?

A. Firstly, I wanted to do something for ZEE5. Then again, the story in itself is brilliant. It’s about the love story of a gay couple in Kolkata. I always had friends who are gay. In class eight or nine, I had a friend named Rahul. He was gay and so the entire class refused to talk to him. So I made it a point to talk to him and eventually we became best friends. I also had to face a lot of things because of that. But I didn’t stop talking to him or hanging out or going to his house. I think this story, at this point of time, is very much required. People everywhere are screaming about bringing in a change, but they are not changing themselves. So I wanted to portray this as an actor, kissing a co-actor on screen. And I am happy to know that it has been very widely accepted. Unlike what I thought, there are a lot of good people too.

A. I did not prepare as such because I believe in spontaneity and instinct. But this character is nothing like me. I don’t talk so softly, and I have never listened to my father so much till date like this character, Mallar. It was a little tough for me. While shooting, I felt like replying to my on-screen dad instantly sometimes. So I had to do a little homework about how to be subtle and quiet. The scene where I am coming out to my father, I knew my emotion had to be perfect because I was talking on behalf of all those who haven’t come out to their families yet.

Q. Was it difficult playing an LGBT character on screen?

A. I started off doing a short film which was based on a polyamorous relationship. It was a diploma film for SRFTI. I believe that since I am an actor, I have to do many things. In one web series, I had to walk on the road in my underpants. I don’t have inhibitions. If it is something logical, then I will go for it. In fact, Ranada (director Abhijit Guha) was feeling a little shy when Gourab and I were kissing. I asked him if he wants to do a retake. Even though he said ‘hoye geche’, I could see his face and understand that he wanted another shot. So I went to a corner – noyto lokey ki bhabbe ami chumu khete bhalobashi — and told him, ‘you don’t look satisfied, do you want to take another shot?’ That’s when we took another shot. When the camera is on, I can do anything.

Q. In the film, you kiss Gourab’s character Angshuman. Did you both do any special mental preparation before the scene?

A. The only thing that was bugging me was his beard. The friction caused by both our beards actually hurt me. Except that, I always act with my kind of music on. That anyway puts me in a good mood. But post the shot, I was feeling awkward talking to Gourab. It felt like we were actually in a relationship. But I enjoyed it.

I Found The Story Of Bhalobashar Shohor – Kolkatar Kobitara To Be Different:…

I Believe That Anyone Watching Pori Will Fall In Love With Aditya: Gaurav…

A. Everything is now about gimmick. People are not watching content unless there are twists and turns. I am a very romantic person. I had once written ‘I love you’ on the walls in my school, South Point. While everyone was complaining about me to the teacher, Rajeshwari aunty, she said, “In times like these when there is so much violence, I don’t find anything wrong if someone writes ‘I love you’.” That really moved me. We can’t accept love really. So in such situations, I think there should be more love stories. Kolkata is a sensitive place. Most people associate the city with culture, but for me, it’s sensitivity. Bengalis love celebrating. City of Joy is the perfect moniker for Kolkata.

Q. What are your favourite dating spots?

A. There is a park next to South Point called Chaplin Park which is popular with Pointers and people from Patha Bhavan. That is where we used to date, hiding from our teachers who used to pass by from that area.

A. I am doing a couple of web series’. Apart from that, I am also doing director Arindam Sil’s next project and a movie called Archie.

Kali Pujo Special: 3 Delicious Mutton Curries That You Should Get Cooking Right Now