Everyone Wanted To Have Biryani Whenever, Wherever During Shoot, Says Director Aditi Roy

The director of ZEE5 Original film Daawat-E-Biryani talks about selecting the cast, creating Lucknow of yore and more. Read on. 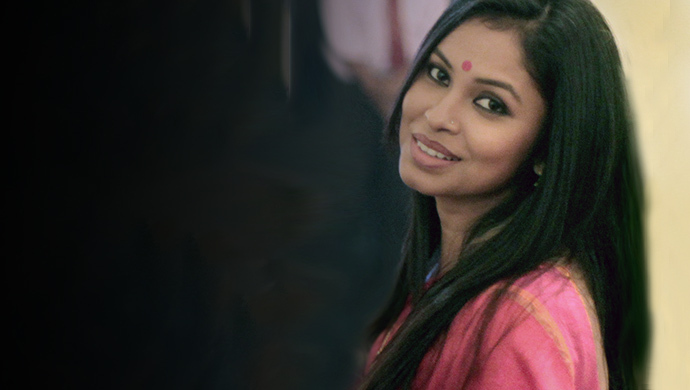 A food movie or a movie about love? We are not sure what we would call ZEE5 Original Daawat-E-Biryani. But one thing is for sure, whether you like romance or love biryani, the film is going to appeal to you. We caught up with the director, Aditi Roy to chat about the movie. Here are edited excerpts:

Q. How did you come up with the concept of Daawat-E-Biryani?

A. Biryani was the subject given by Mr Prosenjit Chatterjee (the presenter) and was asked to weave a story. The first thing that came to my mind was Lucknow and then there was biryani. I love the Kolkata biryani with aloo in it and that has to lead to none other than Wajid Ali Shah (the exiled Nawab of Lucknow). It was a full circle. The love story was what could weave the journey of 50 years joining a few lives and two cities. And we had our story.

Q. How did you select the cast?

A. We loved Sauraseni’s (Maitra) acting in her debut film so we decided on her. Anuradha (Mukherjee, who plays the younger Aafreen) was so spontaneous in Sweater. We spent an evening with her and knew she was the Aafreen we were looking for. Suhasini Mulay was suggested by ZEE5 much earlier. She was the ideal beautiful grandmother and uncannily, there is a shadow of Suhasiniji in Anuradha. We noticed it much ahead of the look test. As the script was 80 per cent in Hindi, we selected our cast based on their Hindi-speaking abilities. The production house came up with Jayant Kripalani’s name for the character. He has that Lucknawi tehzeeb as well as that sophistication of a Cambridge-returned scholar.

Q. Everyone loves biryani. Any fun moments at the set?

A. During script reading, shoot and post production — everyone involved wanted to have biryani whenever, wherever …The daawat became a continuous process . And believe me, everyone who has called up post watching the film said that they ordered biryani after watching the film. The film is making people hungry, that’s very reassuring.

Getting A Lot Of Mails From Rani Rashmoni Fans For Bhalobashar Shohor: Gourab…

Q. How difficult was recreating the Lucknow of yesteryears?

A. Lucknow has its own essence which is in the minds of people who love the history, the architecture, the music, the food and the language. Neel B. Mitra (co-writer and screenplay writer) wrote about the house Panchali will visit in minute detail. That house was our only demand — a sprawling unkempt bungalow with huge corridors, balconies, big doors and windows and a mango tree. We did find one in Lucknow but that was booked. We planned it back in Metiabruz in Kolkata but because of Ramzan, it was not possible to shoot there. So we created Lucknow indoors through the mood of the screenplay, the production design, etc. Certain parts of Lucknow still take you back by decades.

Q. How would you define Daawat-E-Biryani — a food movie or a love story?

A. “Biryani pet se lekar dil tak pohoch gaya, ab kya karein”. That is how Ranojoy proposed to Aafreen. That itself says it all. A way to a man’s heart is through his stomach, according to an old saying. I could fall for someone who cooks great meals. It is a food love story. My daawat is for everyone — to first watch the film and then order for biryani. But I like the way food and love are interwoven.

A. We have a lot of plans. We have about five bound scripts in different genres and about 15 stories. We don’t have a language bar. We are making Shayori for ZEE5. I will be pitching for both OTT and feature films this year. I am going to concentrate on one particular story we have – Abhinetri — the incidents span over from 1939 to present day. It’s a passionate thriller. I think it’s good for a web series.

In the mood for another movie based on food? Watch ZEE5 Original Filter Coffee Liquor Chaa, streaming now.

Like Abir Chatterjee? Watch Him In And As Byomkesh Bakshi, Now Streaming On ZEE5

EXCLUSIVE: Shooting Kaali In Kolkata Was Like A Homecoming For Me, Says Abhishek Banerjee

IN PICTURES: Check Out How Your Favourite Stars Celebrated Lakshmi Puja

POLL: Will Officer Gupta Be The Foil To Kaali In The Upcoming Season? VOTE NOW!

Birthday Special: Did You Know These Things About Nakshi Kantha’s Jash Aka Suman Dey?