EXCLUSIVE BTS: Check Out These Photos From The Last Day Shoot Of Bokul Kotha

As Bokul Kotha comes to an end on February 1, we went behind-the-scenes to get you photos of the cast spending the last day together. 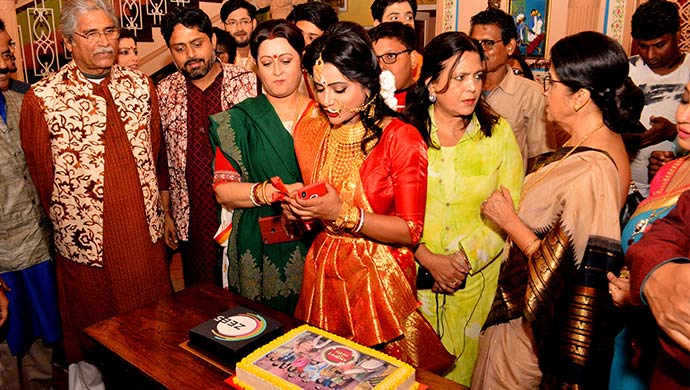 Bokul Kotha is one of the longest-running Bengali TV serials. It has managed to entertain the audience right since the beginning. The serial features actor Ushasi Ray in the lead role as Bokul who is a tomboy. How she changes herself and shapes her character to become a cop in order to find out her father’s killer and how she takes over the responsibilities of her family post her father’s death forms the story. Actor Honey Bafna played the role of Rishi, her husband and ardent supporter.

The show loved by everyone is coming to an end on February 1. Recently, the crew completed shooting for the final episode. We got you some behind-the-scenes photos of all the cast and crew members which show the attachment each of them have towards the show. Check them out.

After shooting the final episode, everyone was quite emotional. You can clearly see Ushasi with tears in her eyes as she cuts the cakes. This shows the bond each one shared at the sets. Check out the video below.

The entire cast got the chance to relive their happy moments together. Right from the actors to technicians – it was a tearful farewell on the final shot. A visibly-emotional Ushasi says: “This is where we had cut the 100-episode cake. Thank you so much to Zee Bangla…for giving us such a beautiful opportunity. Today we are very emotional. Can’t say we are happy…We are not going to be meeting each other or standing on this floor and cutting anyone’s birthday cake or 500-episode cake.” She promises to get back with a serial that will complete 1,000 episodes.

There were two special cakes for the cast on this occasion. One cake had the group photo of the main cast along with the show title while another cake was a dark chocolate cake with the ZEE5 logo on it. They had a gala time as they cut the cakes and fed each other. While the whole cast was sad, they looked to be happy about this journey and seemed to be reminiscing their old memories.

While the show might have ended now, the whole story has left a big mark in our hearts. We are surely excited to watch the final episodes of this beautiful show.

Did You Know These Things About Your Favourite Character Bokul Aka Ushasi Ray?

Is Jash Still In Love With Shabnam? Watch The Latest Episodes Of Nakshi Kantha On ZEE5 To Find Out

Nakshi Kantha: Is Jash Still In Love With Shabnam?