The stars of the Bengali serial went to Dakshineshwar temple. Check out behind-the-scenes pictures. 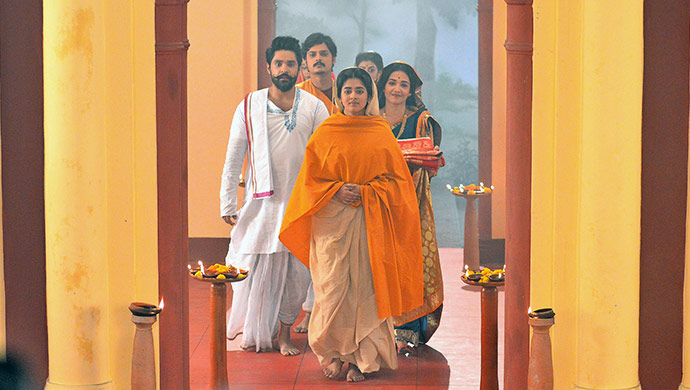 Rani Rashmoni is one of the most prominent figures in the history of Bengal. A social reformer and a zamindar who refused to bow down to the British She is also the founder of the Dakshineshwar Kali Temple. She played an important role in the life of Ramakrishna Paramhansa by employing him as the head priest of the temple. This paved the way to his journey towards wisdom. She was a brave soul who had an untamed zeal and led the fight against the aggression of the British East India Company in 19th century Bengal. The latest Bengali TV serial Rani Rashmoni focuses on the events of her life right from her childhood days. The actor in the titular role, Ditipriya Roy, manages to capture the complete essence of the character.

Check out the recent episode of Rani Rashmoni below.

The cast recently made a trip to Dakshineshwar where they had to shoot for the next few episodes of the serial. We got you some behind-the-scenes photos from the shoot at this special location where Ramakrishna Deb lived and attained sainthood. Considering that the famous temple has an important part to play in Rani Rashmoni’s life, it seemed apt for the entire cast to visit this location.

Dakshineshwar is one of the most important pilgrimage sites in Bengal. It is by the Hooghly river, which is considered pious to Hindus. It is also considered the twin town of Varanasi by many locals. It is the home of many other sites like Ramakrishna Sarada Math, Adhyapith temple, etc. While it serves as a key tourism site, Dakshineswar is also a military base.

Tell us what you think about Dakshineshwar temple in the comments section below.

EXCLUSIVE PICS: Check Out Rani Rashmoni Actor Ditipriya Roy Having Fun At The…