They turned up, they sang and even shared secrets. Watch the biggest actors of Zee Bangla attend the star-studded gala. 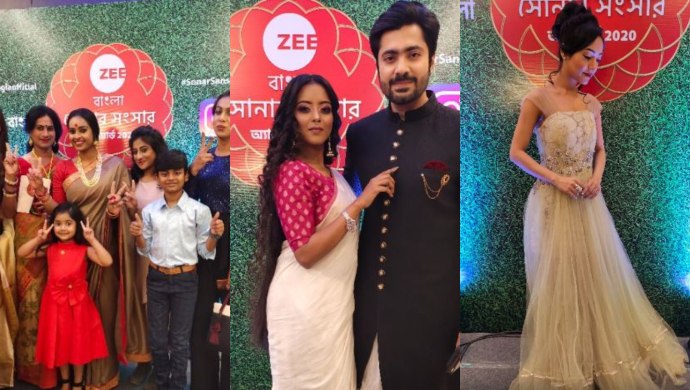 The Zee Bangla Sonar Sansar Award 2020 was just held in Kolkata. While we wait to watch what happened and which of our favourite actors and serial grabbed top spot as the event is telecast on ZEE5, we got you a sneak peek of who all attended the star-studded event. As you wait for this year’s edition, take a look at last year’ extravaganza below:

Check out who all turned up and here’s what they had to say:

Manali Dey and Suman Dey from Nakshi Kantha, when asked about their experience in the award show, expressed their happiness on being called fan favourites. As the host asked about their craziest birthday experiences, Manali asked her fans to do something crazy on her birthday.

Watching the glam jodi of #NoyonDripto from Trinayani all dressed up for the event, the emcee asks about the time taken for them to get ready. When Noyon is asked what’s the best thing about Dripto, she showers him with a huge list of praises, that leaves Gourab Roy Chowdhury aka Dripto blushing. He goes on to return the compliment.

Honey Bafna, who looks dapper in a kurta gets praised by the anchor for his simplicity and style. Guess what kind of girls he likes? Honest, simple, not too decked up and punctual are the qualities that Bokul Kotha’s Rishi loves in a girl.

Dhrubo, who is seen in the popular serial Netaji got compliments for his sense of style. Just as he was being complimented, two gorgeous ladies from the show also join the conversation. They went on to talk about the shopping trips in between the shoots.

Adhiraj Ganguly from the hit serial, Soudaminir Sansar talks about their usual spats where each character starts spilling secrets about each other. The host asks Sushmili about what her teacher feels about her and she replies that they are proud of her and Adhiraj also agrees about being grateful of his fans who have made him famous.

Do you recognise her? Well, it’s none other than Sneha Chatterjee Bhowmick aka Rohini from Nakshi Kantha. Can you recognise her in this maxi dress and a cropped bolero jacket? She even goes on to sing a song!

Our very own Didi is here to share her thoughts with us. Have a look! @rachnabanerjee #SonarSansar2020 #ZeeBangla

Rachna Banerjee, aka our beloved Didi No. 1, plays a rapid-fire round with the host and answers questions about relationships in a very candid way.

Here's Raya being her genuine self. Don't you love her? #SonarSansar2020 #ZeeBangla

Ishani Das, who plays the role of Raya in Bagh Bondi Khela, says she prefers comfort over fashion. Hear her talk about her love for mutton biryani and Horlicks. Isn’t that cute?

The Phirki team is interviewed by the host who goes on to compliment everyone from the cast for being so well-dressed. The entire cast wishes Zee Bangla, a very happy birthday.

Guess What! Trinayani's Dripto Is A Poet. We Got You All The Proof!