Have Been Attracted To A Few Pretty Bengali Ladies From Kolkata: Chandan Roy Sanyal

The actor opens up about his character Siddhartha, in ZEE5 Original Bhalobashar Shohor – Arshinagar, dating in the city, and more. 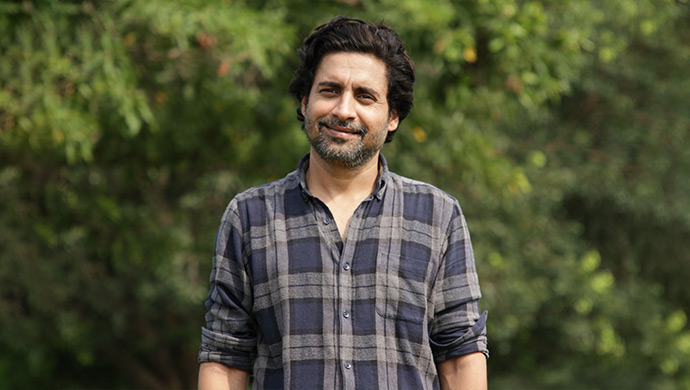 The ZEE5 Original Bhalobashar Shohor, is a series of stories about Kolkata, and love in Kolkata. Actor Chandan Roy Sanyal features in one of them – Arshinagar, where he plays the character of Siddhartha, a recovering alcoholic, who is in love with Indira (Tanushree Chakrabarty). We caught up with the actor with a bunch of questions. Even though Chandan was busy with shoots and Durga Puja visits, he did WhatsApp us the answers. Read on to find out about his love stories in Kolkata, his favourite dating spots and more.

Q. What made you take up the role of Siddhartha in Bhalobashar Shohor- Arshinagar?

A. I have known Rohan (Ghose) and Aritra Sen (the people behind the concept and the story), for a while. We did an ad which they directed. Rohan called me saying that he’s doing a show for ZEE5 and it’s the opening film, a short story about the city of Kolkata. It’s a love story — the story of an alcoholic. He sent me the script. I read it and thought I could bring in something to the story and I decided to do it.

Q. Siddhartha is an alcoholic who is also commitment phobic. But he has good qualities too. What do you think they are?

A. Yeah, Siddhatha is an alcoholic and he is commitment phobic. But I think the great thing about him is that he is quite passionate. He’s confused but with a lot of passion. He cares, he’s quite humane. He is a caring person. He loves the woman a lot. And though he screws up in the middle and gets married somewhere, but somehow I believe that he gets back to who he loves the most. I think he’s quite a lonely person also.

Q. Do you relate to the character of Siddhartha?

A. (Laughs) Yeah. I am not an alcoholic, nor do I have any commitment phobia. Those two things are out. But the rest of the things maybe I would say yeah, the passionate side of it or the artist side of it or the caring side of it, definitely yes.

Q. What do you think are the ingredients of a successful relationship?

A. The most definite ingredients for a successful relationship, I would say is trust. Trust is the most important thing. Openness, where you can share everything under the sun with your partner. I think more than everything else, you have to be great partners, great roommates and great friends. I mean, everything else fizzles out. The sexual attraction and everything else, at the end of the day it all fizzles out. It all boils down to friendship and trust.

Kolkata is bhalobashar shohor. Have you ever dated in Kolkata?

Definitely Kolkata is a bhalobashar shohor. No, I have never dated anyone in Kolkata. But yeah, I have been attracted to a few pretty ladies — Bengali ladies from the city, at different points of my life. I think it’s a beautiful city with beautiful women, very intelligent, classy, outgoing and strong. I think that’s what I like about Bengali women. They are very strong. That’s why we have a Durga or a Kali.

Q. What are your favourite dating spots in Kolkata?

A. See, I would say (laughs), definitely the coffee shop opposite St. Xavier’s College. I also used to like this really nice beer bar at the Fairlawn Hotel. Sadly, it has shut down. I have liked some places…I definitely like eateries but the small joints, not the famous ones. Also, this one place called Broadway Hotel which has some good food and some really cheap beer. Lot of Chinese in Tangra and Tung Fong in Park Street.

The people in it, the deep-rooted culture, the history, the food, the fashion, the taxis…I think the family bonding and the education and the universities and the poetry, the cinema, the cha and fuchka…I think it’s endless. The history-soaked city with dilapidated walls and effects of the British aristocracy on the walls, the politics…

A. I just finished shooting a series with Kalki Koechlin (Bhram on ZEE5). Then I have another bilingual series called Kali with Paoli Dam which will also air on ZEE5. Talks are on for a very big series to be directed by a top-notch director, but I can’t reveal the details now as nothing is final.

In The Mood For Some Comedy? Watch Jeet In Baccha Shoshur, Now Streaming On ZEE5