No. The real-life couple isn’t getting married yet. But we cannot get enough of their love story. 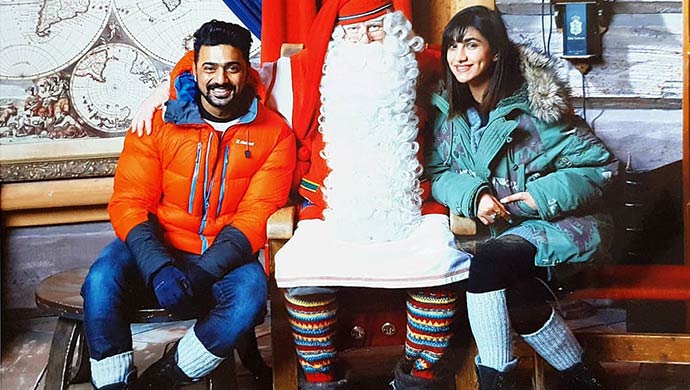 Guess what? Dev just shared a biyer card on his social media account and the fandom just went berserk! Of course, everyone assumed that he is tying the knot with his real-life girlfriend and Cockpit co-star Rukmini Maitra. However, it seems like it was a publicity stunt for a movie, which Dev later clarified with another post on social media. Nevertheless, can you ever get enough of the love story between Tollywood’s reigning superstar Dev and his model-turned-actor girlfriend Rukmini? We sure can’t. So watch them in Cockpit below and check out all the photos of the lovebirds.

In Cockpit, Dev plays the role of a pilot, Dibyendu Rakshit, who must safely land a Kolkata-Mumbai flight after they suffer massive turbulence which ends up damaging the engines. The film features Dev and Rukmini, who manages to pull off all the action sequences flawlessly.

The couple has always been open about their relationship. They also post photos of each other during their holidays and hangouts. Here are a few recent photos of theirs that you need to check out.

At the Oxford Bookstore right now for a Panel discussion on #PASSWORD Join in if you are nearby!

The couple donned matching red outfits as they pose together at a bookstore. Watch them dressed in ethnic and slaying it.

From the Premiere of #KABIR. Book Your Tickets Now though the Link in Bio. #KABIR #PeaceHasAPrice

The power couple managed to kill the on-camera look when they were spotted together at a premiere. Yet again, Dev and Rukmini are co-ordinating their outfits. Like much.

With my Crazy ( @ajit_freedom) and Not So Crazy ( @imdevadhikari ) Boys!

Check out Dev looking all suave in a tux while Rukmini looks gorgeous in a beautiful red dress. The couple poses together with a common friend. Their appearance clearly shows who is the chic couple on the block.

Happy Birthday to the Superstar and my one and only co-star!😜😜😜🤣 Few down.. And a million more to come… Not movies but Memories..💕🙂 Happy Everyday to you! Love & Luck your way Always! ❤ @imdevadhikari

We love this special post by Rukmini to wish Dev on his birthday. She writes: “Happy Birthday to the Superstar and my one and only co-star! Few down. And a million more to come… Not movies but Memories. Happy Every day to you! Love & Luck your way Always!”. Such a cute message isn’t it!

And once again, A Happy Happy Birthday to @imdevadhikari and also Merry Christmas to All!! That's the best two In One I got! 😀😋🎅🌟💖

This photo shows the power couple posing with Santa Claus while Rukmini wishes all her fans a very happy Christmas through this post.

In between shots! The Love keeps coming! #Happy&Lucky #ShootScenes #bts

In this cute photo, you can see both the stars as they pose for a behind-the-scene shot. In this candid click, both the actors seem to be having an interesting conversation while they play with their dogs.

Are you, like us, waiting for the couple to get married? Let us know in the comments section below.