This Pavel Bhattacharjee blockbuster coming soon to the platform boasts of an epic cast and screenplay. Read on to know more! 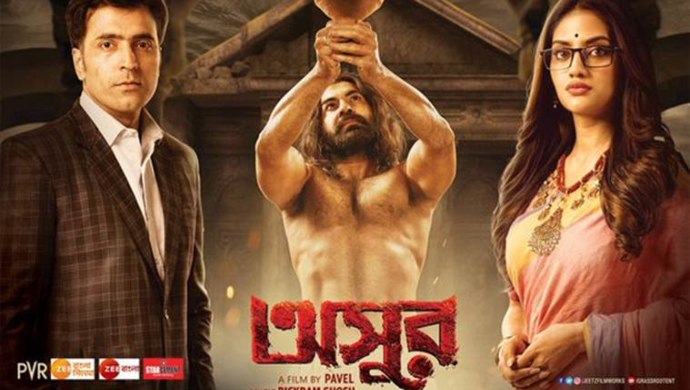 Asur, the latest Bengali film by director Pavel Bhattacharjee, will soon be available to view on the ZEE5 platform from April 10. If you were looking for reasons that you need to catch up on this film, well, there are several! To start with, the star-studded cast of actors includes superstar Jeet, the dynamic Abir Chatterjee and the gorgeously talented Nusrat Jahan– a stellar trio indeed! Watch the trailer below.

The premise of the film is rather exciting. Based on the artist Ramkinkar Baij, the storyline is a tribute to the great sculptor, whom Jeet portrays through his character called Kigan, with brilliant conviction. Kigan is an eccentric genius who is fired from his day job as a professor, only to view it as the perfect opportunity to focus on creating his best work. He cannot stop musing about the goddess Durga as a young girl and summons his friend Aditi (played by Nusrat) to help him execute his plan of installing the largest idol of the Devi that there ever was, in Deshbandhu Park. Aditi’s father (played by Biplab Chatterjee) is a member of the park’s committee and thus she can help set it up with his guidance.

However, Aditi’s husband Bodhi (played by Abir) is also an old friend of Kigan’s, and feels unbearably jealous about the whole arrangement and is determined to sabotage Kigan, who has no idea of these sentiments from Bodhi towards him. What follows is a highly-charged drama with emotions running wild and fast-paced action sequences for an additional rush of adrenaline. You are sure to be hooked to the riveting and highly intriguing storyline of Asur throughout! With exceptionally intelligent performances by the actors and impeccable production onscreen, the film makes for a fabulous watch and will have you completely absorbed into the characters and their circumstances.

How excited are you to catch Asur on ZEE5? Let us know your thoughts in the comments below.

Birthday Special: 5 Lesser-Known Facts About Ritwick Chakraborty That Will Put…

Check Out What's Happening In Nakshi Kantha Now On ZEE5