Holi Special: These Colourful Photos By Our Stars Celebrating Dol Jatra Will Make Your Day 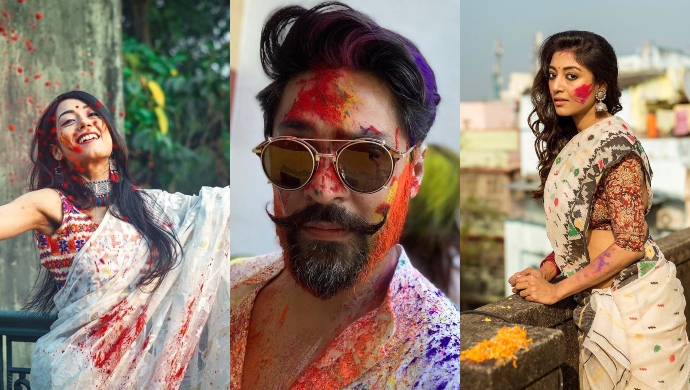 It’s Holi or rather Dol Jatra in Bengal, and many of our biggest stars have coloured our social media feed with a spate of brilliant photos captured of them playing dol. One look at these will definitely brighten your day and put you in just the spirit for this beautiful festival of colours. We bring you a compilation of them right here!

Superstar Prosenjit, our very own Bumba da, has wished us a happy Basanta Utsav (spring festival) with a line from the famous Rabindrasangeet Rangiye Diye Jao (splash us with colour and go). Indeed, what better way to put us in the festive mood?

Happy Holi everyone! Enjoy the festival of color safely! 💜 #HappyHoli

Rituparna Sengupta, the veteran actor and one of Bengal’s biggest stars, looks so bright and happy in this photo, it will cheer you up instantly! This Holi, watch her in Atithi, 2019 directed by Sujith Kumar Paul.

Paoli Dam has also posted a series of images where she is smeared with abir. The stunning Kaali star looks absolutely ravishing in a classic saree and the contrasting Holi colours. We can’t wait till Kaali 2 is released on March 27!

The Bengali hero Gourab Chatterjee, who plays Mathuramohan (Mathur Babu) on Rani Rashmoni, has already played a fair bit of Holi! And he looks every bit as dashing as ever in his multi-hued colours and stylish shades– truly a sight for sore eyes. Does it make you want to gather up everybody and celebrate already?

Madhumita Sarcar‘s colourful video snippet is a joy to behold. The gorgeous ZEE5 Original Series Judgement Day actor lets “the colours speak it all” while sending her wishes, and we can safely say that they do!

❤💜🧡💛Let this day be a celebration of reunion, togetherness and love…. #HappyHoli.. ❤💜🧡💛 #Photography by Rahul Das.. #SpecialTouch– Sweety Das..

Promita Chakrabarrty, who stars in Saat Bhai Champa, looks as pretty as a picture in her photos too!

Her colourful caption reads: “❤💜🧡💛Let this day be a celebration of reunion, togetherness and love…. #HappyHoli.. ❤💜🧡💛 #Photography by Rahul Das.. #SpecialTouch– Sweety Das..” Amen to that!

A post shared by Parambrata Chattopadhyay (@parambratachattopadhyay) on Mar 9, 2020 at 6:21am PDT

Parambrata Chattopadhyay, the iconic Kadambari actor, blesses us with a colourful smile as well as Dol wishes. Watch him in Shonar Pahar, a 2018 film he has directed as well as acted in along with Jisshu Sengupta and Tanuja.

Happy Holi to all ❤️

Raj Chakraborty, the director of Parineeta, has posted this lovely photo with wife and actor Subhashree Ganguly that will melt your heart and make you want to play Holi right now!

Trinayani’s Dripto also takes the opportunity to convey his wishes for Basanta Utsav in this video with fellow actor Shreema Bhattacharjee. Gourab and Shreema’s excitement is contagious, we feel!

Watch ZEE5 Original film Shorshe Ilish, a short film about a husband (Indraneil Sengupta) who suspects his wife of having an affair.

Watch 8 Of Your Favourite Stars In These Blockbusters On ZEE5