I Believe That Anyone Watching Pori Will Fall In Love With Aditya: Gaurav Chakrabarty

The Bhalobashar Shohor actor spills the beans on his favourite dating spots, the experience of working with wife Ridhima again, and more. Read on. 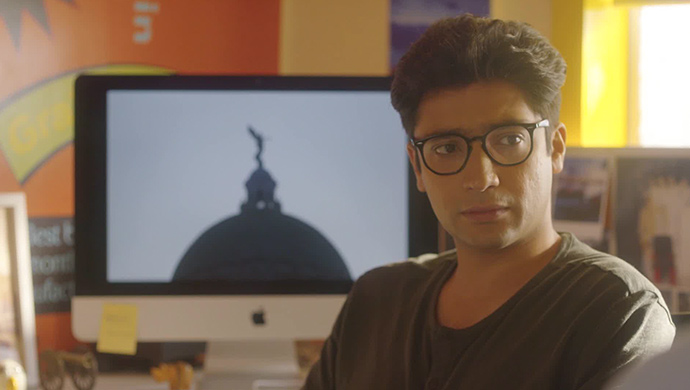 A day dreamer who dreams of the fairy on top of Victoria Memorial. A super talented artist. An out-and-out romantic. That’s Aditya for you. He falls in love with Torsha, who he is led to believe is Victoria’s pori. And the magic begins in the ZEE5 Original film Bhalobashar Shohor – Pori. This latest Bengali film, which is a fairytale romance, brings together real-life couple Gaurav Chakrabarty and Ridhima Ghosh on screen after a gap of four years. Their chemistry is magical. We got Gaurav to open up about all things Pori. Here are the edited excerpts:

Q. What made you decide to do the ZEE5 Original film Bhalobashar Shohor-Pori?

A. I really liked the script. I have known Aritra (Sen) and Rohan (Ghose) for a very long time and they were going to be directing this. Also, it gave me an opportunity to work with Ridhima again after about four years or so. But the primary cause was the script. I really liked the story. When I heard it, I asked Rohan how he plans to write the script because it is complex story. Designing it into a script was going to be difficult. But he did it, and the final result was really nice.

A. I didn’t really prepare much in that way. I read the script and had a discussion with Aritra and Rohan. They had very specific ideas about how this character would behave and the kind of guy Aditya is. It was entirely their inputs which I tried to incorporate in my acting and give them what they wanted in my own way. My preparation was the session I had with them. Rohan read the script. I wanted him to read it out to me so that I knew exactly what he wanted while writing some lines and situations. And that was my homework.

Q. Are you a romantic?

A. I would like to believe I am. (Laughs) I don’t really know.

Q. How much like Aditya are you in real life?

A. I am not as talented as Aditya is. He’s a great artist and has wonderful ideas. I need a script, a director to tell me what to do and how to go about it. But I am not as romantic as him. He romanticises about everything and is a day dreamer. I am a day dreamer, but not as much as Aditya. I am also like him in the sense that he keeps to himself, doesn’t talk too much, doesn’t have too many friends. Actually no, I have a lot of friends (laughs). But yeah, I like keeping to myself. Maybe that’s where I connect with Aditya.

Have You Ever Thought What Will Happen If Victoria’s Pori Comes To You?

I Am Actually A Romantic At Heart, Love Stories Are My Guilty Pleasure: Ridhima…

Q. Ridhima called it a ‘fairytale love story’. How was the experience of ‘dating’ her on screen?

A. It is actually a fairytale love story. The way the story plays out, it’s a fairytale. It’s the tale of an actual fairy. It’s wonderful to work with Ridhima. My first feature film was with her. That was about nine years ago. Over the next few years, we worked on a few projects. But the last time I worked with her, that was for TV. We did a Byomkesh series where I was Byomkesh and she was my wife Satyabati. But that was four years ago. And now I got an opportunity to work with her again. I should not be saying this, the audience should be saying this, but I think we have some chemistry. It really comes across well. Not every real-life pair has got reel-life chemistry. But I truly believe that we look nice together. Also, I don’t have to work too hard to bring out the chemistry or the love that I have for her character. It just comes naturally. Maybe that’s why it’s always a great experience working with her.

Q. How was the experience of ‘dating’ Ridhima in Victoria Memorial and Maidan?

Q. The movie has a few magical moments. Which are your favourites?

A. They are all really nice and romantic. I truly believe that anyone watching the film will fall in love with Aditya because of the things he does. He is just too perfect. There are two particular wishes he fulfils that I really like. The first one is the one where she (Ridhima’s character Torsha) had asked for stars and he gets this jar full of fireflies. I think it’s fantastic. The way he interprets her wish and the way it looks visually on screen — its very surreal. Also, the way he gets it to rain. At the back of your mind when you are watching the film, you know he’s using a rain machine. But then the way it plays out and what it does to the two of them, I think it is very romantic.

A. Kolkata has got a great character to it. I have been to many cities in the world. I have lived in Pune for a very long time. When you are not living in Kolkata, people say Calcutta is old, Calcutta has lazy people, it’s not as advanced as the other cities…But those people, when they come to live in Calcutta, they fall in love with the city. There is something in the city itself that makes you want to fall in love with the city, and makes you want to fall in love in general. My connect with Calcutta is obviously because it’s my hometown, but anybody I meet from outside and who has been to the city and lived here for quite some time, they will vouch for the fact that the city is worth falling in love with. I don’t know what it is, but there is something about Calcutta.

A. I haven’t really visited too many dating spots. But there are quite a few amazing romantic places. We shot in one – Princep Ghat. The location that it is in, I think it is one of the best places to go on a date. Incidentally during my first film opposite Ridhima, we did our first shot there. That is why Princep Ghat has this connect with us. And we got to shoot there again during Pori. Also, I don’t know if it still exists, there was this ice cream parlour Scoop which was a very nice place. There is something about the entire boulevard, the Hooghly river.

A. There’s a feature film called Sagardwipey Jawker Dhon which is coming out, based on the Jawker Dhon series. It is a fantastic film, given where it is shot and the kind of story it is. I am really looking forward to it. There is Tenida again which is coming out next year. I have just started working on Srijit Mukherji’s next film. There is another web series on ZEE5, Lalbazaar.