IN PICS: Cockpit Star Dev Learns How To Play Football From Bhaichung Bhutia

Dev turns footballer for his next film, so it seems that training sessions have already started. 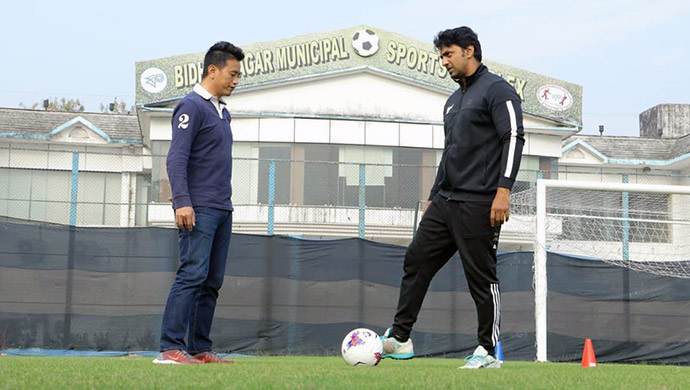 What was Tollywood superstar Dev doing on a chilly November morning at the Bidhan Nagar Municipal Sports Complex in Kolkata? It seems that the actor is on a sporty roll. Having previously played the role of a cricketer in the Bengali film Le Chakka and a boxer in the movie Champ, Dev is all set to play a footballer in his next film, Golondaz, the shooting for which starts in January. While you wait for his next release, watch his film Cockpit, also starring Koel Mallick and Dev’s girlfriend Rukmini Maitra, here:

Guess who Dev is training under for his role? It’s none other than the football prodigy and ex-India captain Bhaichung Bhutia, who has played for Maidan giants East Bengal and Mohun Bagan for most of his career. Dev’s film is based on Nagendra Prasad Sarbadhikari, who is considered to be the father of Indian football for bringing about a revolution in the sport and setting up many leagues in Kolkata.

Dev is known for his powerful and engaging performances. His ability to choose diverse roles has won him many accolades and appreciation. The actor is all set to conquer the screen and hearts, with his next film.

Dev’s dedication and perseverance to get the character right, is well known. The actor has gone through immense preparation for his upcoming role. Visit his Instagram account, and you can get the sneak-peek of the same. Check out all the pictures here.

Tell us what you think of his pictures in the comments section below and stay tuned for more updates!

Gear Up For A New Love Story, Ki Kore Bolbo Tomay, On ZEE5 From 16 December