Is This The Beginning Of The End For Rohini And Swapnadip In Nakshi Kantha?

Will Swapnadip’s accomplice Shyamal Das reveal all at the court? 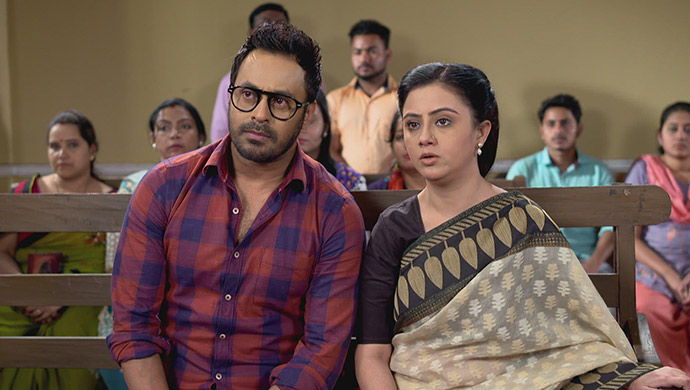 Things are moving really fast in the latest Bengali TV serial Nakshi Kantha. Shabnam (played by Manali Dey) and Debdeep (played by Indrajit Chakrabarty) are hell-bent on finding out who tried to kill Shabnam and had lodged a police complaint naming Rohini and Swapnadip. The case, which is being heard by a fast-track court, has seen a lot of drama so far, with Swapnadip denying that he had molested Shabnam to Jash (played by Suman Dey) lying. In the latest episode however, it seems like the ball has started rolling really fast and the noose is tightening around Rohini and Swapnadip. If you missed out on watching the episode, watch it below.

In the episode, we saw that Swapnadip, who is in police custody since Shabnam’s complaint, was called to the court to be cross-examined by both lawyers. When Rohini and Jash’s lawyer asked him where and how he met Shabnam, Swapnadip said that he doesn’t know Shabnam very well because she was much junior to them in Medical College and he was not aware that Jash and Shabnam had gone to the seaside for a vacation. He lied saying that Shabnam had tried to seduce him and when he had resisted, she had shouted and created a scene. And that was not enough, he even said that for him, Rohini is like any other friend.

During cross-examination, Shabnam’s lawyer asked him when was the last time Swapnadip had gone on a vacation. He replied saying that he had last gone to Mussourie a few years back. When Shabnam’s lawyer produced CCTV footage showing Swapnadip with his four accomplices in Sukhsari, Shabnam recognised one of them as one of the people who tried to kill her. Faced with evidence, Swapnadip lied again and said that he had gone for a medical camp organised by a junior.

The ‘junior’ Shyamal Das was produced in court next and he admitted that he was not a doctor and had only studied till class eight. Even Jash recognised Shyamal Das. But will he say that in court? It remains to be seen. In the meantime, we are curious to find out whether Shyamal Das will reveal the entire conspiracy which will prove that Rohini and Swapnadip tried to kill Shabnam.

Stay tuned for today’s episode to find out.

Do you think Jash will tell the truth in the court about the four men they met in Sukhsari? Let us know in the comments box below.