Karna, despite burning his hand, makes a mean payesh. On the other hand, Payel is planning to get Trisha married to Karna as soon as possible. 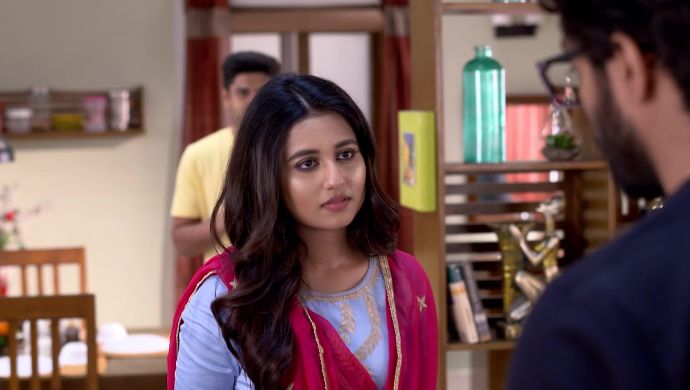 This episode of the latest Zee Bangla TV serial Ki Kore Bolbo Tomay opens with Karna (Krushal Ahuja) struggling with making the payesh like he has been challenged to by Joy (Uday Pratap Singh). Radhika (Swastika Dutta) tries to intervene but Karna shoos her away and continues to labour painstakingly over the payesh! He also starts daydreaming about Radhika in between, and seeing him space out, Radhika rushes back to monitor the process, only to be shooed away again. Watch the full episode below.

Radhika anxiously scolds him for trying to prove abilities which he clearly lacks, and Karna continues to insist that he’s got it all together and doesn’t need her help. Soon, the payesh is almost completely ready. Suddenly, he lets out a yelp of pain and we see that he has burned his hand slightly. Radhika rushes to his aid and takes care of the burn by offering Karna ice. She rebukes him for not heeding her warnings, but assures him that it is only a minor injury.

Karna is too afraid to even look, and retorts that he had experienced a terrible burn from scalding hot water in his childhood, and that’s why he is scared. After Radhika finishes taking care of the burn, she teases him for being such a scaredy cat, and starts calling him “bheetu Sir”  instead of Karna Sir! They start squabbling which leads to a pillow fight between them.

Meanwhile, we see Payel (Manosi Sengupta) talking to someone — probably her father — on the phone. She tells him off for leaving her there to take care of all her problems, but says that she will manage fine, especially once she has successfully arranged the marriage of Karna and Trisha (Somashri Bhattacharya). Once they are married, she can rest easy and take control of the property.

At Radhika’s, Joy who had slipped out for an errand, comes running back. After sanitising, he sniffs the air and remarks at the wonderful smell and congratulates Karna. Radhika chimes in by saying he couldn’t have made the payesh without her around, and regrets not filming the time that he was smarting from the burn!

At the Sen house, Payel brings up the question of Karna’s marriage with Trisha to Karna’s mother, who asks why this has suddenly come up. Patel informs her that her father will break all business ties with Sen Creations if Karna does not marry Trisha. Karna’s mother is shocked at this, but Payel says that it is her responsibility to ensure that this happens, or face the consequences. Karna’s mother tells her that forcing a relationship between two people without their consent never turns out well, but Payel reiterates her father’s threat. Karna’s mother decides to talk to Payel’s father on priority to prevent an impending disaster.

At Radhika’s, everyone is impressed with the payesh Karna has made. After they have all relished it, the irrepressible Joy challenges Radhika to kiss Karna, and it can’t be a flying kiss! Radhika and Karna become visibly embarrassed but not totally averse to the idea! We hold our breaths and watch as Radhika slowly walks across the room to Karna, and the episode ends.

Did you enjoy this episode? Tell us in the comments below!

REVIEW: Kaali 2 Is A Riveting Watch That Is Several Times More Thrilling Than…

SPOILER: What Is Rohini Now Planning to Do In Order To Get Jash Back In Nakshi…

EXCLUSIVE BTS: Check Out These Photos Taken During The Filming Of Thriller…