Paro faces a setback at home that slows her down and makes her work difficult. Angshu tries his best to take care of her. 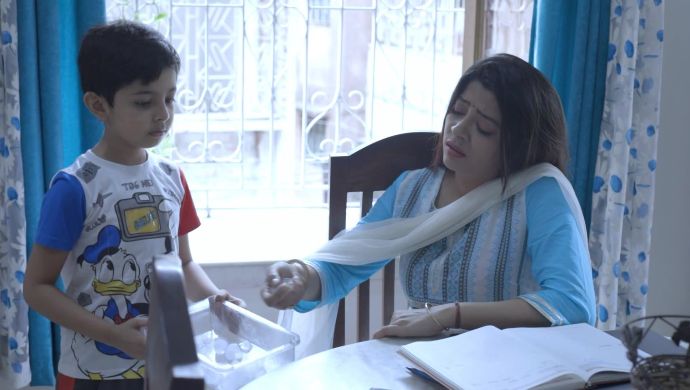 Episode five of the latest Bengali TV serial Lockdown Diary — Golpo Holeo Satti opens with Paro opening the southern window as she has just heard a noise. Angshu watches as she does this, heart pounding in trepidation at the thought that she might chance upon Raju. To his relief, Paro reports that there is nothing. Later, she tells Gautam (played by Shaheb Chatterjee) what a good boy Angshu has been lately and how proud she is of him. Gautam is thrilled to hear this, and speaks to his son on the phone.

Watch this episode below:

Angshu has been getting his mathematics homework completely right, something that he had been struggling with earlier. Paro puts this down to his new coaching class online as she has no idea about Raju and his influence on her son. While playing, Raju mentions to Angshu that he has big plans of growing up and taking care of his mother to ease her burdens. His mother coughs and suffers every night, and he can only watch helplessly. Angshu is sad on hearing this, and informs Raju that to grow up, one needs to study a lot. Crestfallen, Raju wonders how he can do this without going to school. Angshu tells him that he would only be too willing to teach him what he learns in his classes.

When asked what he would like to eat, Angshu tells Paro that he would love to try some chila. He has heard about it from Raju, who has told him how nutritious it is, and how healthy and strong it keeps his family. Paro rubbishes the idea and tells him it is a ridiculous choice but later, when looking up the ingredients, discovers that this protein-rich dish is indeed a great option. In the kitchen, Paro slips on the floor which had water spilled on it, and twists her foot.

Angshu is alarmed but helps her out by applying ice and a bandage on her foot. Gautam, when he hears about this, calls up a doctor and gets some urgent medicines prescribed to help heal her foot. However, the pharmacy informs Paro that home delivery is not an option, and she has to come and collect them herself. Angshu offers to go and get them, but Paro cannot let him as she is wary of what might happen on the street during lockdown. When Raju hears about this, he offers to go to the pharmacy himself. Angshu is touched but does not know what to tell him.

Did you enjoy this episode of Lockdown Diary — Golpo Holeo Satti? Let us know in the comment section below!

Anthem Of The Brave: Check Out The Awesome Theme Song For Kaali 2 Which Has Just Dropped