Nakshi Kantha: 5 Moments From The December 4, 2019 Episode That Stand Out

Rohini is afraid that Shabnam might remember everything and come looking for Jash. Meanwhile, Shabnam starts getting glimpses from the past. 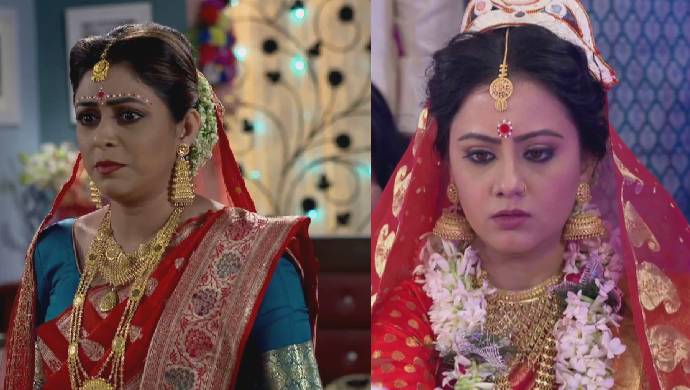 Previously on the latest Bengali TV serial Nakshi Kantha, Shabnam (played by Manali Dey) confessed to Debdeep (played by Indrajit Chakraborty) that she wished she could put together the pieces from her past that keep crowding in her head. Although, she was ultimately unable to do so, we do see her getting flashbacks from her past where she saw certain unrecognisable faces. On other hand, Jash (played by Suman Dey), who had agreed to marry Rohini (played by Sneha Chatterjee), found it difficult to convince his family to accept the wedding. His family was torn into two with his mother supporting her son wholeheartedly while his father nearly stepping out of the house as a mark of defiance.

In the episode that was aired on December 4, 2019, things take an uncanny turn with the weddings about to begin. Watch the episode here before TV to find out what happened:

Here are five high points from the episode:

Jash’s father made it a point to revolt against his son’s decision to marry Rohini. As much as he despises her, he is concerned that Jash might find it difficult to cope with the marriage immediately after losing Shabnam. He states that marrying Rohini might bring in momentary satisfaction, but that would never be enough for Jash to be absolutely happy in his life.

2. His Family Attends The Wedding

Rohini is worried that even if Jash doesn’t break their marriage, Shabnam might decide to get back to Jash. She discusses the matter with Swapnadip who ensures her that Shabnam’s partial dementia will keep her at bay for a long time. Rohini, however, is not entirely convinced and admits that she fears the wedding might get cancelled. By now, she is certain that Shabnam has lost her memory.

Nakshi Kantha Spoiler: Will Rohini Be Able To Remove Suspicion From Jash’s…

As the rituals for Aparajita aka Shabnam and Debdeep’s marriage begin, Shabnam starts getting flashbacks from the past. gets flashes about a wedding. However, she can’t make out the face of the bride and the groom. Throughout the time, she is distracted even as she carries on with the ceremony.

As her memories begin to make a comeback, Shabnam faints right when Debdeep is about to apply sindoor. She pushes his arm away and yells out before losing consciousness as she clearly sees Jash’s face in her mind now. When she regains her senses, Shabnam looks around and immediately asks for Jash. The entire family is left aghast by the incident.

What do you think will happen next? Let us know in the comments section below.

Do check out Bokul Katha, streaming now on ZEE5.

TRAILER REVIEW: Parineeta Looks Like A Gritting Tale of Love, Pain And Revenge