As she is about to get married, we see Shabnam lose consciousness and utter Jash's name as she comes back to senses. Has she got her memory back? 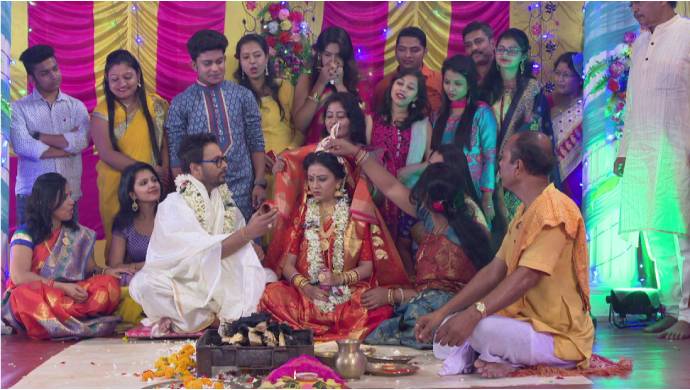 The latest Bengali TV serial Nakshi Kantha has reached a tipping point. Jash (played by Suman Dey) and Shabnam (played by Manali Dey) are all set to get married again — to Rohini and Debdeep, respectively. Shabnam, now renamed Aparajita by Debdeep’s family, is still trying hard to recollect her past which she is unable to recollect due to her temporary loss of memory. On the other hand, Jash is hell-bent on marrying Rohini despite his father stating that he does not approve of the match. However, looks like the weddings are finally happening. In spite of resistance from his father and uncle, Jash is set to marry Rohini and on his parents’ insistence, Shabnam is marrying Debdeep. But will both these marriages actually take place? Watch the spoiler here:

In the spoiler for the episode to be aired on December 4, 2019, we see Shabnam dressed as a bride, sitting next to Debdeep. However, just as Debdeep is about to do the sindoor daan and seal their relationship, Shabnam pushes his hand away and loses conscious. While everyone is anxious, she regains consciousness and immediately looks for Jash. Has Shabnam regained her memory?

In the episode aired on December 3, 2o19, we see Shabnam is struggling to pick up the pieces of her lost memory. In a brief exchange of concern with Debdeep, she admits that she would want her memory back. There are parts of herself that she wishes she could remember, to which Debdip considers giving her more time. His mother, too, tries comforting Shabnam right before the marriage that things would eventually fall in place and her son, who is quite a renowned doctor, might be able to help her with it.

In the closing scenes of the episode, we see that Shabnam is getting a few glimpses of her past. She gets flashes of a wedding scene from the past. Will Shabnam’s memory return?

What will happen now? Will Debdeep go ahead with the marriage? Or will he keep his promise and help Shabnam get back to Jash? Will Jash really marry Rohini? Let us know what you think in the comment section below.

Also, do check out the latest episodes of Rani Rashmoni, on ZEE5 now.

Click Here To Watch The No.1 Bengali Serial Trinayani On ZEE5