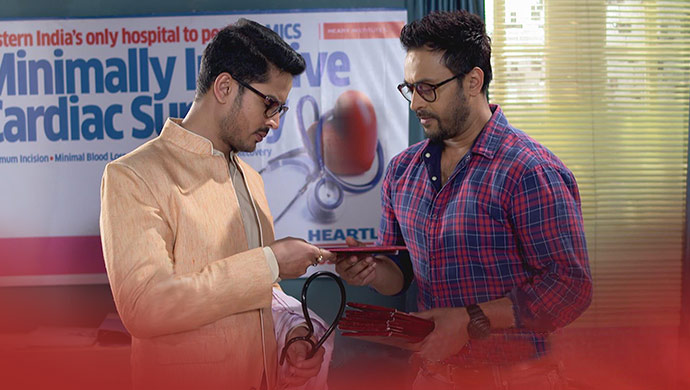 In the latest Bengali TV serial Nakshi Kantha, it is now certain that Jash (played by Suman Dey) is still in love with Shabnam (played by Manali Dey). And Shabnam also confessed to Ranjhapishi that she also still loves Jash. The way Jash took care of Shabnam when she broke her leg and the pain in his voice when he asked Shabnam whether it is paining a lot, it was evident that he still cares for her.

Shabnam also told Ranjhapishi that while she still loves Jash, she believes that the both of them are not meant to be together. She tells Ranjhapishi that while there might be a lot of things in their relationship, there was no respect. On the other hand, she respects Debdeep (played by Indrajit Chakraborty) a lot and later tells Debdeep that even though she is still not in love with him, she is certain that eventually she will fall in love with him post marriage.

In the spoiler for the episode to be aired on February 5, we see a not-so-happy Shabnam trying to give her wedding card to Jash. She looks extremely sad while holding the card and her hands are actually trembling. Jash also looks terribly upset. Watch the episode spoiler below:

Are they both reliving the moments that they spent together? From the sensational wedding they had to finally Shabnam getting accepted by Jash’s family, the duo finally going to Sukhsari for their honeymoon where the fateful incident happened – too many incidents tie Jash and Shabnam together. Even though Jash hurt Shabnam a lot while the court case was going on against Rohini and Swapnadip for trying to kill Shabnam, the love doesn’t seem to have gone completely. Or was it that Jash was trying to shield Shabnam from Rohini by marrying her? Stay tuned to find out.

4 Reasons Why We Are All Hooked To The No.1 Bengali TV Serial Trinayani

No Matter Where You Are, Make It More Romantic With These Getaway Ideas