Nakshi Kantha: Is Jash Still In Love With Shabnam?

In the latest episode of the popular serial starring Suman Dey and Manali Dey, we saw some high-octane moments between the duo. 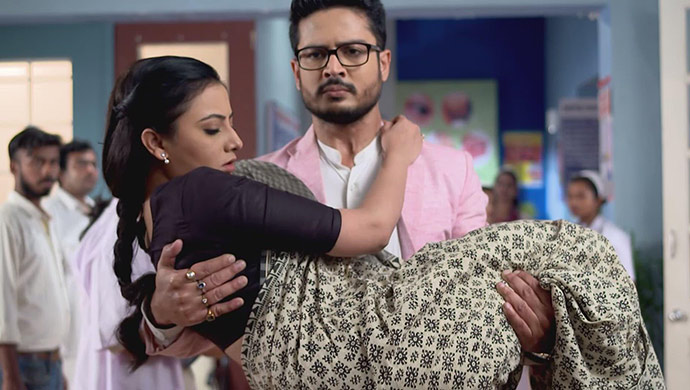 In the latest Bengali TV serial Nakshi Kantha, Rohini is now in jail following Shabnam’s (played by Manali Dey) complaint against her that she and Swapnadip had conspired to kill her. It has angered Jash (played by Suman Dey) beyond belief. Jash’s family is now clearly divided in support of Rohini and Shabnam. While his father, uncle, sister-in-law Mahua (who testified against Jash’s mother in court) and aunt support Shabnam, his mother Kankana and cousin Parag are in favour of Rohini.

Things heated up further recently when Jash threatened Shabnam, and she along with Debdeep went to the police station to complain about him. The police even came to the hospital to warn Jash about his behaviour. But happenings in the latest episode are making us question whether Jash really hates Shabnam now or is he just jealous that she is with Debdeep? Watch the latest episode below.

In the episode aired on January 28, 2020, we see that Shabnam, while talking to a nurse in the hospital, trips and falls, badly hurting her leg which is probably broken. Jash, who was passing, sees her and comes to pick her up and take her to the cabin to start her treatment. While Shabnam initially resists, pushing his hand away, he eventually convinces her and picks her up in his arms, all the while mocking her that he is doing it as a doctor and she should call her ‘husband’ or rather her ‘would-be husband’ and inform him. Jash even gets someone from the hospital to call Debdeep.

Did you notice how Jash looks at Shabnam when she is in pain? A concerned Jash tells her that if she tries to put pressure on her leg and gets up, she will cause permanent damage. He does look very concerned and tells her that she should do an X-ray. He suggests a painkiller and says that he can understand that she is in a lot of pain.

When Debdeep comes, Shabnam is unable to tell him that it is Jash who tied the crepe bandage and is treating her. However, Jash comes in and doesn’t lose any opportunity to tell Debdeep. Jash tauntingly asks Debdeep whether he has any problem that he is treating Shabnam. It looks like a clash of egos is on between Debdeep and Jash now as Debdeep doesn’t seem to be too happy about Jash treating Shabnam.

We are waiting to watch what happens next.

Boys, Dress Up In Ethnicwear This Saraswati Puja Like Your Favourite Stars

EXCLUSIVE BTS: Check Out These Photos From The Last Day Shoot Of Bokul Kotha