Nakshi Kantha Poll: Debdeep Or Jash, Who Is A Better Partner For Shabnam?

Take this poll and tell us who you think makes for a better partner for Shabnam. 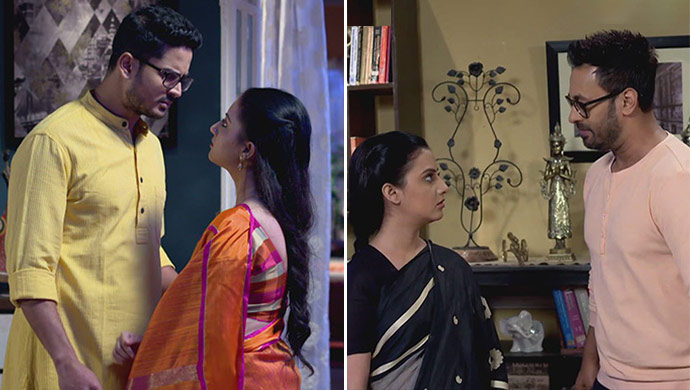 Gear up for yet another wedding in the latest Bengali TV serial Nakshi Kantha. After Jash (played by Suman Dey) got married to Rohini, it is now Shabnam’s (played by Manali Dey) turn to marry Debdeep (played by Indrajit Chakraborty). The cards have been printed and Debdeep and Shabnam came down to invite everyone at the hospital where Shabnam works, and especially Jash.

In the latest episode of Nakshi Kantha, we saw that Jash, Shabnam and Debdeep are all attending this ceremony thrown by Shabnam’s hospital administration. In his speech, Jash says that he is sorry for ever hurting Shabnam. He even goes on to say that his life’s aim was to keep Shabnam happy. He also sings a song, Jodi Kichu Amare Sudhao, for Shabnam and Debdeep. Debdeep tells Shabnam that Jash is in pain and that she is feeling the pain too. Shabnam admits that she is feeling pained. Debdeep says that if they didn’t feel this pain, he would have thought they are not humans. In her speech, Shabnam says that she wishes that Jash remain her friend at all times. She had previously confessed to Ranjhapishi that she still loves Jash.

Yes, Jash and Shabnam made a great pair. They got married under unusual circumstances, when Jash went against Shabnam’s conservative father, cut his palm on his sword and applied ‘sindoor’ on Shabnam’s forehead. A lot of water has flown under the bridge since then and Shabnam and Jash are no longer together now.

#2XTheLove: These Jash-Shabnam Photos Are Making Us Miss Their Pair

While Jash was a romantic, he was also immature. Debdeep, on the other hand, is more practical and dependable. Will Shabnam go ahead and marry Debdeep? Stay tuned to find out.

Meanwhile, why don’t you take this poll and tell us who you think should be a better partner for Shabnam?

Debdeep Or Jash? Who Do You Think Is A Better Partner For Shabnam?
For more entertaining content, watch Bagh Bondi Khela on ZEE5.