Even though it had seemed like Shabnam and Jash were meant to be, Rohini had other plans. Will they find their way back to each other again? Vote now! 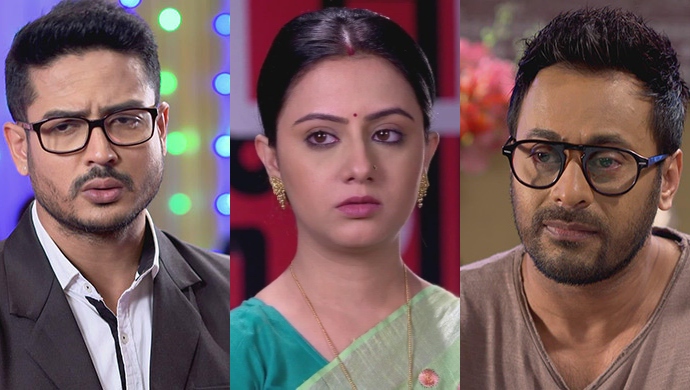 In the popular Bengali TV serial Nakshi Kantha, Shabnam (played by Manali Dey) and Jash (played by Suman Dey) were deeply in love and their dreamy romance even led to marriage. However, the evil Rohini (played by Sneha Chatterjee Bhowmik) conspired against them and attempted to kill Shabnam! Thankfully, Shabnam escaped the clutches of death which a dangerous incident at sea threatened to bring when she was on her honeymoon with Jash. However, she lost her memory as a result, but was rescued by Debdeep (played by Indrajit Chakraborty), who then took care of her and married her.

Watch the latest episode of the serial here:

Jash, when he became wise to what was going on, gave in to Rohini and married her instead to help protect Shabnam from her vicious intentions. When Shabnam regained her memory though, she was horrified and it is clear that she still has her old feelings for Jash. Debdeep knows this too, but he continues being a dutiful husband to her and a great friend to Jash too. In fact, when they learn that Jash is suffering from cancer, it is he who conducts his surgery and takes care of him.

Now Jash is stuck in a loveless marriage with Rohini, and although Debdeep is such a good husband to Shabnam, what will they do with all these unresolved feelings that have only continued to build up? As much as Shabnam cares for Debdeep, her heart goes out to Jash and she cannot bear to see him suffering– physically or emotionally! What do you think will happen? Take this poll and tell us.

Do you think Shabnam will get back together with Jash?

Stay tuned to your favourite show.

Detective Byomkesh Bakshi is back in this thrilling new film with Parambrata Chattopadhyay. Watch Satyanweshi Byomkesh now on ZEE5!

Learn How To Cook Up A Storm With Aparajita On Rannaghar Only On ZEE5.

Comic Relief: 4 Funny Moments From Asur That Stand Out For Their Humour