The story of putting her mother in a nursing home in Diamond Harbour has started raising doubts. What will Rohini do now? 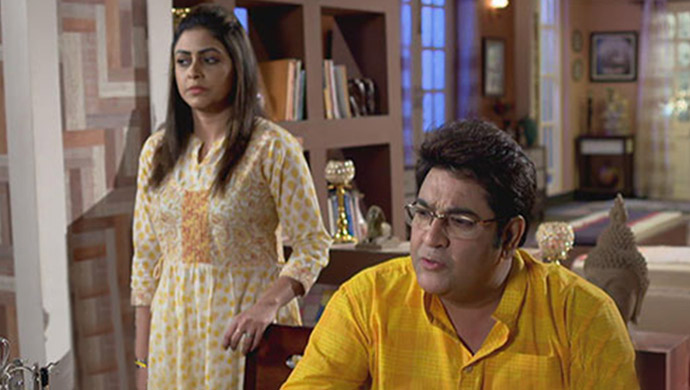 A lot has been happening recently at the latest Bengali TV serial Nakshi Kantha. Shabnam (played by Manali Dey) has lost her memory after being drowned by Swapnadip’s men on Rohini’s instructions. She has been rescued by Debdeep and brought back to Kolkata. Meanwhile, Jash (played by Suman Dey) has been unable to cope with the situation and believes that Shabnam is dead. Rohini has been trying to take full advantage of the situation and is pretending to be a friend to Jash to help him come out of the situation. In reality, though, she is trying to get back into Jash’s life. Watch the episode here.

In the spoiler for the episode to be aired on November 21, 2019, we see that Jash’s father asks Rohini why she got her mother admitted in a nursing home in Diamond Harbour even though she stays in Kolkata. Rohini tries to avoid answering by saying why they are so suspicious about the entire thing. Jash’s father replies saying that he was unable to find a nursing home called Care in Diamond Harbour. What will Rohini do now?

Earlier we have seen that on the way back from Shabnam’s memorial at the hospital, Jash and Rohini bump into Debdeep who had come to the same shop to buy chocolates which Shabnam aka Aparajita wanted. On the way out, Rohini spots Shabnam. Somehow, she manages to divert Jash’s attention. Shabnam, too, does not spot either of them, though having lost her memory, it is not clear whether she would be able to identify Jash or Rohini even if they come face-to-face.

Nakshi Kantha Spoiler: What Is Going To Happen To Shabnam Now?

In Debdeep’s house, his parents are keen to make Shabnam their daughter-in-law and even say the same to neighbours who come over to see Shabnam out of curiosity. Rohini goes to Jash’s house and when asked how she can stay over even though her mother is unwell, explains that she has appointed a full-time nurse for her mother.

World Television Day: 4 Onscreen Characters In Bengali Serials Who We Love To Hate

Every Human Is Possessive, The Extent May Vary: Shorshe Ilish Actor Indraneil Sengupta