NAKSHI KANTHA SPOILER: Will Shabnam Be Able To Reach On Time And Stop Jash’s Wedding?

In the preview for today’s episode, we see Jash doing sindoor daan. Will Shabnam be able to stop him? 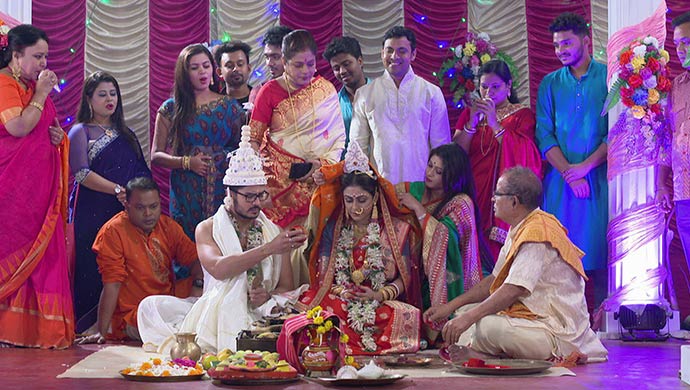 Things have been moving rather fast in the latest Bengali TV serial Nakshi Kantha. In the recent episodes, we saw that Aparajita aka Shabnam (played by Manali Dey) has got her memory back just as Debdeep was about to do the sindoor daan on the day of their wedding. Jash (played by Suman Dey), meanwhile, has proceeded to Rohini’s house to get married to her. His father and uncle, despite initial opposition, have agreed to accompany him to the wedding.

Previously we saw that even though Shabnam reached Jash’s house and met his mother (who, no surprises there, has always hated Shabnam), she was shocked to see Shabnam and refused to tell her anything about Jash’s wedding with Rohini. However, she did let it slip that Jash has gone to Rohini’s house. She even refused to acknowledge Shabnam as her daughter-in-law and casted doubts saying she doesn’t believe she’s actually Shabnam.

We saw Shabnam and Debdeep rush towards Rohini’s house to meet Jash. Jash’s mother too, took off immediately to warn Rohini and ensure that Shabnam is unable to cancel the wedding. In the spoiler for the episode to be aired on December 09, we see Jash and Rohini at the mandap and Jash taking the sindoor kouto in his hand to apply the sindoor on Rohini’s forehead. Watch the preview here.

And then we see Shabnam entering frantically, calling out to Jash while everyone is shocked to see her. What do you think will happen next? Will Shabnam be able to stop the wedding? Had Jash already applied the sindoor on Rohini’s forehead? Let us know what you think in the comments section below.

Nakshi Kantha: 5 Power-Packed Moments From The 6 December 2019 Episode To Watch…

Try Out These Weekend Destinations Like Shabnam Aka Manali Dey

For more entertainment, watch all episodes of Trinayani on ZEE5.

4 Reasons Why We Are All Hooked To The No.1 Bengali TV Serial Trinayani

IN PICS: All The Photos You Need To See From Star Director Srijit Mukherji’s Wedding