While Shabnam is in two minds about getting married to Debdeep, Rohini is looking for ways to convince Jash for marriage. 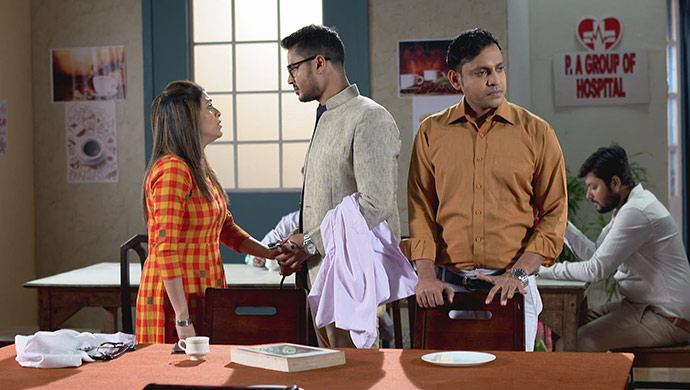 Previously in the latest Bengali TV serial Nakshi Kantha, we have seen that Shabnam (played by Manali Dey) is in two minds about the marriage proposal from Debdeep’s parents. While Debdeep and his parents are really keen on having Aparajita aka Shabnam married to the former, Shabnam is in two minds. But it is Rohini that one needs to watch out for as she is trying every means to get back to Jash’s (played by Suman Dey) life, as his wedded wife. Watch the latest episode here.

In the episode that is aired on November 25, 2019, we see that Rohini is taking Swapnadip to task for failing in the job of killing Shabnam again. She insists that she has seen Shabnam, with another man, in the road in front of the hospital. Rohini is clearly relieved that Jash did not see Shabnam, but she is extremely worried that he might come across Shabnam any time. Swapnadip insists that Shabnam is no longer alive but Rohini is not convinced. She asks Swapnadip to look for Shabnam in the area. Rohini is now desperate to marry Jash before he comes across Shabnam.

In the meantime, Jash comes in. While Rohini pretends to go to the OPD, Swapnadip tries a new trick to convince Jash to marry Rohini. He tries the sympathy card. While Jash is not sure that Shabnam is gone forever, Swapnadip tells him that Rohini has to face a lot of insults to be beside Jash at his hour of need and while he can ignore what people are saying, she wouldn’t be able to for long. Swapnadip suggests that Jash make Rohini his wife so that she can be with him all the time and he also won’t be feeling lonely or alone. When Jash is still not convinced, Swapnadip goes ahead and tells him that Rohini might commit suicide, unable to bear the taunts.

Nakshi Kantha: 7 High Points From The Maha Porbo That You Should Go Back And…

Will Jash be able to marry Rohini again? Let us know in the comments section below. For more entertainment, watch Bokul Kotha on ZEE5.