Does Rohini like Jash or Debdeep? Does Jash like Rohini or Shabnam? Suman Dey and Sneha Chatterjee Bhowmik from the Bengali TV serial give answers. 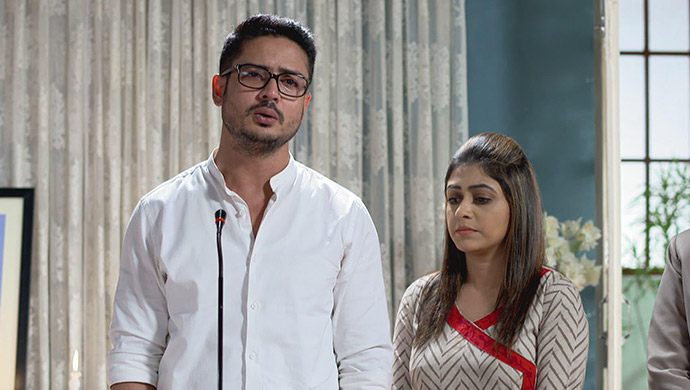 In the hit Bengali TV serial Nakshi Kantha, drama is at its peak as Shabnam (played by Manali Dey) and Jash (played by Suman Dey) are still deeply in love with each other despite Shabnam being married to Debdeep now (played by Indrajit Chakraborty). Shabnam and Jash were earlier married to each other. However, the evil Rohini (played by Sneha Chatterjee Bhowmik) conspired against them and attempted to kill Shabnam! In reality though, Suman and Sneha — the actors who play Jash and Rohini, respectively — share a bond of camaraderie with each other.

Watch the latest episode from the Zee Bangla TV show below:

While the nationwide lockdown to contain the Coronavirus continues, shooting is on hold. However, we manage to stay in touch with our favourite stars though various means like social media. Recently, Suman and Sneha came online on Zee Bangla’s official page to do a live chat session for their fans. It was a lot of fun, and we picked up many juicy details from them.

@sumandey321 and @sneha.mishti came live on Instagram to do a quick chat session with our live audience. Don't miss out on the rapid fire🤣 #ZeeBangla #ZeeBanglaHD

The live session started with a rapid fire round where Suman asked Sneha different questions. The first question Sneha had to answer was who is more handsome — Debdeep or Jash. Sneha, without hesitating, answered ‘Jash’! She then went on to choose married life over single life, even though she said she has hardly had enough time to be single, as she had been dating her husband for eight years before getting married at the age of 23. She did admit that nothing beats getting pampered at one’s parents’ home, and the sudden segue into marriage can be slightly unsettling, but it is worth it if you find the right partner. Sneha also sang a Bengali song very beautifully while online, so don’t miss it!

Next, Suman had to answer Sneha’s questions. We got to know that he prefers Shabnam to Rohini, to which Sneha said that at least Rohini was unwavering in her choice, unlike him! Suman also said that he likes working out even better than lazing around, and that he would choose to be single over being married! We also learnt that he prefers to sport a stubble over being clean shaven or having a beard. Sneha had a lot of fun asking him the questions, and said that he is a total sweetheart for taking all of his co-stars’ teasings very sportingly. Suman blushed on hearing this, and indeed, was extremely charming throughout! Catch this live chat session today.

What did you think of Suman and Sneha’s rapid fire round? Let us know with your comment in the section below.

Nakshi Kantha Poll: Debdeep Or Jash, Who Is A Better Partner For Shabnam?

Watch Shesh Mess, A Futuristic Bengali Drama Only On ZEE5.