Priyanka’s Character Himeli Is Like How I Was 10 Years Back, Says Director Debarati Gupta 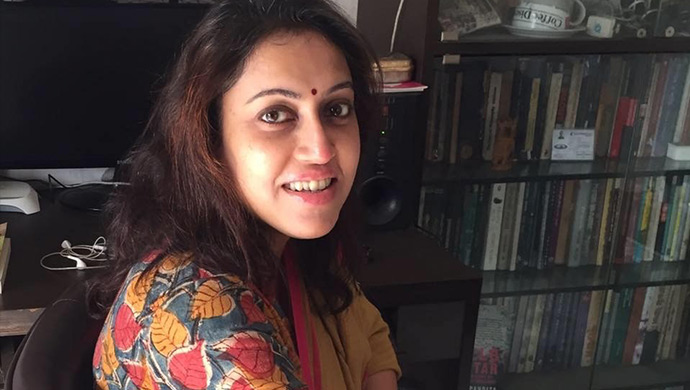 Two completely different characters fall in love with each other in ZEE5 Original film Filter Coffee Liquor Chaa. And like all great romances, theirs too starts with a fight. A sweet romantic comedy starring Nishan Nanaiah and Priyanka Sarkar, this latest Bengali movie about Himeli and Subu’s love story is a must watch. We caught up with director Debarati Gupta right before she was going abroad about all things Filter Coffee Liquor Chaa. Here are edited excerpts:

Q. How did you come across the concept of ZEE5 Original film Filter Coffee Liquor Chaa?

A. I was told to do a romantic comedy. It’s not like I had been nourishing this concept for a long time. I was told about the ‘food movies’ where food will be an integral part of the movie. So, I was asked which genre I wanted to work on. I had never done a rom-com before. However, I like them a lot and I also watch them a lot. So, I said I wanted to do a rom-com. That’s when I started working on this film. It is a simple love story. But it is the characteristics of Subramanium and Himeli that make Filter Coffee Liquor Chaa different.

Q. Any real-life references for the characters?

A. Basically, Himeli is a lot like me. So I didn’t have to work hard to create the character. She is a lot like how I was 10 years back. I had a similar desperation to become a filmmaker. Yes, I wasn’t from a small town and didn’t have to do a cookery show to survive, but I had to do a lot of things which I didn’t like doing. The character of Himeli is a lot like that. Even my food habits and characteristics are similar to Himeli’s. Then I thought what a completely contrasting character would be like. That’s how the character of Subu came in place. Right from cultural contrast to nature  — he is shantoshishto while she is an extrovert, he is very religious and she is an atheist, he is a good cook and she can’t cook at all. Along with that, there were cultural contrasts like vegetarian and non vegetarian, Bengali and south Indian, etc.

Q. How did you decide on the cast?

A. When I thought of a Tamil lady, we were trying to figure out who were the Tamil actors of that age in Kolkata. ZEE5 suggested Usha Uthup’s name. I was sceptical whether she would do the film. But because this is a Prosenjit Chatterjee production, she immediately agreed. I loved working with her. We haven’t really seen her act a lot. We saw Ushadi in Saat Khoon Maaf, but Bengalis don’t know much about her acting prowess. She has a small role, but she has done that so naturally and poignantly. I have worked with Priyanka before in Hoichoi. I know her for a long time so we kind of reunited for this movie. I really wanted to work with her again. Nishan had done a thriller web series earlier for which I was a part of the writing team. I had seen him before — a south Indian boy who is an interesting actor. I remembered him when we were doing the casting. A lot of people are telling me that he and Priyanka looked good together in the movie.

Q. How will you describe the movie? Is it a food movie or a relationship drama?

A. It’s basically a romantic comedy with food as the catalyst.

Q. Any memorable foodie moments from the shoot?

A. Of course. We shot Kolkata’s street food in the Dalhousie area for an entire day. That day we started with jilipi. It was like we shot jilipi and we had jilipi. We shot doi bora and we had doi bora. As and when we shot something, we had them. People found the street food part very lively. And I think that happened because we really love food. We truly loved shooting the entire schedule but especially that day was kind of unique. We generally think that actresses are conscious about diet, but Priyanka, Rupsha and even Nishan — they also had a lot of street food.

A. I am working on a real-life story which I came across sometime back. I had a very disturbing and weird experience in Murshidabad. I am also writing a lot of scripts for web series’.

In Bhalobashar Shohor – Arshinagar, I liked the simplicity of my character: Tanusree

I Have A Huge Emotional Connect With Paramount: Rahul Arunoday Banerjee