This episode features couples from Tollywood like Raja and Madhubani Goswami, Kaushik and Diya Chakraborty, and Kanyakumari and Arko Mukherjee. 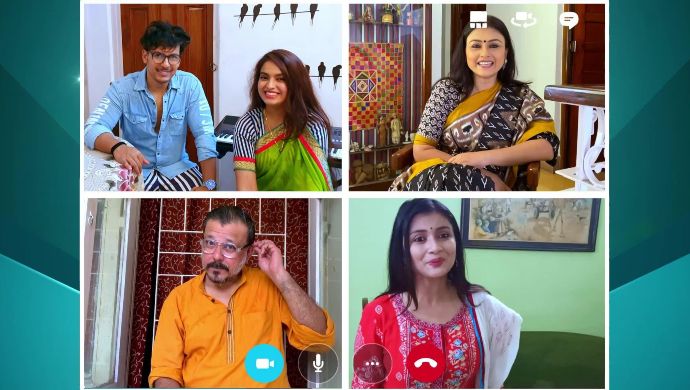 This episode of the reality TV show in Bangla, Priyo Tarakar Andarmahal, features married couples from the Bengali film industry. First, Debjani calls up actors Raja and Madhubani Goswami, who we know from the serial Bhalobasa.com. They are enjoying their time at home with their family. Watch the episode here:

Raja tells us that he has story going to the market for grocery shopping after years. He had not visited one since he was a child, but the lockdown has necessitated this. Madhubani tells us that she has been cooking many different dishes with her mother-in-law, and loves it.

They tell us the story of how their romance first took off, with Madhubani having to propose to Raja, because she knew it would take him ages till he plucked up the courage to do so himself! They have been spending time listening to and playing music apart from domestic chores. They tell us how much they love eating sweets and living in North Kolkata, have pretty high standards! Madhubani’s mother-in-law confides that she can get very fussy if she cannot find her favourite butterscotch sondesh.

Next, Debjani calls up Kaushik Chakraborty, the producer, story writer, music director, and actor. He is at home playing Ludo with his family, and his wife Diya joins us for the call too. She says she is happy with his contribution of shopping for essentials, and loves doing all the cooking herself. Then, Raja and Kaushik compete with each other to tidy up all the stray objects lying around in the living room and putting it neatly into a bag within a short time, and Raja wins by a small margin.

Debjani then calls actor Kanyakumari Mukherjee, who we see is dancing with her little son. She says he is quite mischievous and takes after his father, her husband Arko Mukherjee. Arko is a music lover, and we find him playing the guitar in the next room.

After this, everyone joins a game where Debjani mentions an actor, and they have to sing a song from a film that they starred in. This game picks up very well with none of them running out of songs to sing, and Debjani has to interrupt them as the show will be over and they will still continue! However, she video calls the famous singer Nakash Aziz, who sings everyone’s favourite Bollywood number, Jabra, for us live.

What did you think of this episode? Let us know in the comment section below.

Who Is The Newest Character In Ki Kore Bolbo Tomay? Find Out Now On ZEE5.

The Warrior In Every Woman: Kaali Is Back With A Bang On ZEE5 In An Epic Second Season