Debjani connects us to actors Swagata Mukherjee, Nandini Chatterjee, and Sudipta Banerjee, each of whom specialise in playing the role of a villain! 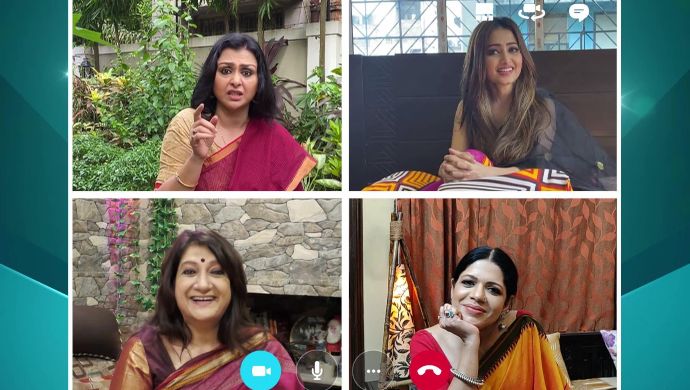 In this episode of the Zee bangla TV show Priyo Tarakar Andarmahal, we meet three Bengali actors who are famous for being characterised as villains in film and television. Swagata Mukherjee, Nandini Chatterjee, Sudipta Banerjee and even the host, Debjani Chatterjee, all find them mainly essaying themselves as negative characters, so this segment is dedicated to them. Watch the episode here:

First, Debjani calls up Swagata Mukherjee, the Bengali actor and singer, who has played a villain in many serials like Durga and Potol Kumar Gaanwala. She tells us that she has been busy with household chores and chatting with her mother-in-law, as well as preparing lessons for her students in the acting academy that she teaches in. She makes witty conversation and entertains us by singing us a Bengali song.

Next, Debjani calls up the famous actor Nandini Chatterjee, who has appeared in films like Taan and Window Connection. She makes a dramatic entrance into the call holding her broom, with which we find she has been trying to swat a roach that’s been trying to evade her. She has been taking advantage of her free time during the lockdown by painting, one of her greatest passions.

Debjani sets Swagata and Nandini a challenge in which they have to race to sort out a bowl of chillies that they each have. They need to separate the green chillies from the red as fast as possible, which they both finish at the same time! Next, Debjani video calls actor Sudipta Banerjee, who plays the role of the evil queen Rani Monimallika in the Bengali serial Saat Bhai Champa.

Debjani starts off a game with all of them, where she suggests the name of a famous villain, and they take turns enacting each out! This becomes a lot of fun, and Sudipta completes the most number of villains and hence wins the challenge. To close the episode, Debjani sets everyone present a task each that they have to complete all at the same time. Swagata has to sing a song while Nandini paints, and Sudipta performs a dance. All of them fulfill their respective tasks beautifully.

Did you enjoy this episode? Let us know what you though in the comments below.

Watch the award-winning Bengali serial Rani Rashmoni only on ZEE5.

Watch The Prosenjit And Rituparna Sengupta Starrer Drishtikone On ZEE5

Manjari, Pranab, Tublu: A Look At All The Members Of The One And Only Basu Poribar