In this episode, we meet actors Prity Basu, Samata Das, Boni Mukherjee, and Biswajit Chakraborty who all star in the Bengali serial Soudaminir Sansar. 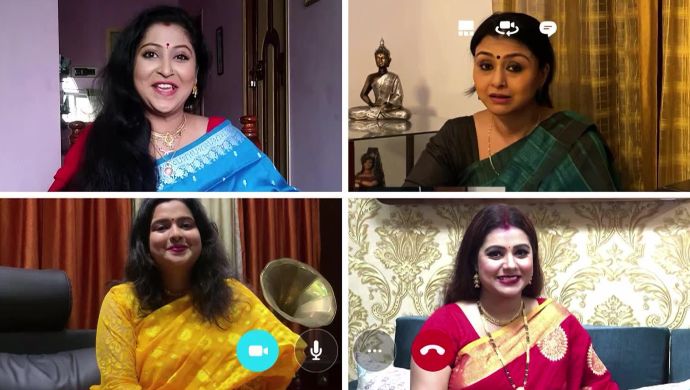 In this episode of Priyo Tarakar Andarmahal, we get to catch up with the actors of the Bengali serial Soudaminir Sansar. Host Debjani Chatterjee first calls up actor Prity Biswas, who plays Annakali in the serial.

Prity is pleasantly surprised to see Debjani, and tells her she has been spending her time doing domestic chores, looking after her sweet mother-in-law, and dancing with her sister-in-law when they have the time.

On hearing this, Debjani requests a performance by them, which they oblige to.

Next, Debjani video calls actor Samata Das, who plays Mainabati in the serial. We find her cooking a dish in her kitchen that her husband has been craving for a while. She pauses to chat with everyone, and we get to hear stories of what it’s like shooting on the set from her and Prity. They talk about how they make sure to bring lots of food, coffee, and utensils to work so they can grab a snack or coffee break at intervals!

Debjani sets the two actors a watermelon-cutting challenge. They have to pare down the fruit into seven pieces within one minute while answering questions to riddles that she asks them! They both win this round and it’s a tie. Then, they want their colleague, actor Boni Mukherjee to join the call, so Debjani connects us her.

We find Boni Mukherjee watching a film with Shah Rukh Khan in it on her screen and is very engrossed! Then, they all play a game of antakshari by selecting a song according to a theme set by Debjani that they first have to dig out from each of their photo albums at home. This proves to be lots of fun which all of them enjoy, and then Debjani calls actor Biswajit Chakraborty.

Biswajit sets Samata a challenge to grind spices on a traditional stone grinder, while Boni and Prity have to finish a big bowlful of noodles within a short time! In the meantime, he recites a Bengali poem for everyone. Then, the other actors want to set him a memory task, which he agrees to complete. He proves his memory is as strong as ever despite his age! The episode closes with all of them singing a song welcoming spring.

What did you think of this episode? Tell us with your comment in the section below!

Monday Motivation: 7 Stars Who Will Inspire You To Take Up Reading As You Self…

In Pics: Did You Know That Bus Stop Actor Souman Bose Is Also A Talented Artist?

Watch the award-winning Bengali serial Rani Rashmoni only on ZEE5.

Check Out What's Happening In The Serial Trinayani Now On ZEE5

Dadagiri Unlimited, Sa Re Ga Ma Pa: 5 Shows You Need To Watch If You Are A Reality TV Fan