We catch up with the most popular Bengali singers, Anupam Roy, Rupankar Bagchi, and Raghab Chatterjee and their families in this episode. 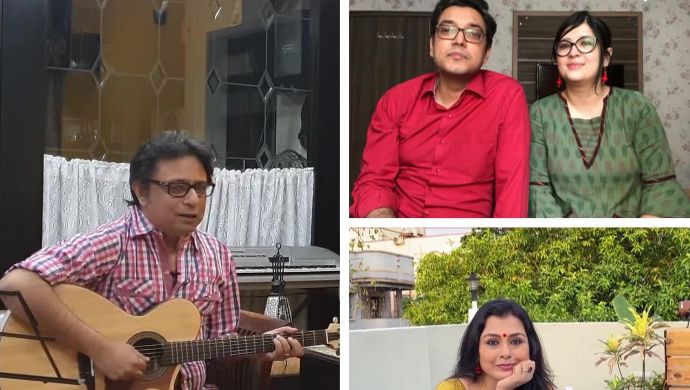 This episode of the Zee Bangla TV show Priyo Tarakar Andarmahal is a musical special. We meet the famous singers — Anupam Roy and his wife Piya, Rupankar Bagchi and Raghab Chatterjee. First, host Debjani video calls Anupam and Piya. Watch the episode below:

Both Anupam and Piya sing beautifully for us, and Anupam even shows us one of the newest songs that he has written.

Then, he performs one of his most popular songs, Amake Amar Moto Thakte Dao. After this, Debjani says Anupam gets 10 out of 10 for music, but wants to know how Piya would rate his housework skills, to which she says 7.5 at the most! Anupam exclaims that he expected top marks, and everyone laughs. Then, Debjani sets Anupam a challenge. Piya brings a collection of gifts that he has given her over the years, and he has to identify the date and occasion that he gave each of them to her. Anupam gets all of them completely right! Next, Debjani video calls the singer Rupankar Bagchi.

He too, sings several Bengali songs for us and his daughter Mehul tells us that she has been learning the guitar at home, and he often helps her out. Anupam and he discuss the time they first started working together, and then Anupam and Piya take a break to eat. Speaking of food, Debjani is reminded of singer Raghab Chatterjee, whom she calls next.

Rupankar starts narrating a story about the time he met up with Raghab once, who was giving him a lift to Shyambazar in his car. After getting there, they went to an eatery called Parbati Bhandar together, and then began an eating marathon for Raghab. He devoured everything from piping hot chop-cutlet to Dhakai porota, singara and dhoka! Then, Mehul sets them a singing challenge, where Rupankar and Raghab have to identify the song from the clues she gives them. Both of them perform fantastically in it. Then, Anupam rejoins the call. Raghab’s family members join us by singing a song very melodiously too.

Then, while Raghab sings us a song, Debjani challenges his children, who have been cooking at home, to whip up and present us with a delicious dish. They quickly make a the most delectable looking caramel custard studded with fruits!

The episode closes with Rupankar, Raghab and Anupam singing us one last song each.

What did you think of this episode of Priyo Tarakar Andarmahal? Tell us by commenting below!

For more entertainment, watch the epic blockbuster Asur on ZEE5.