We meet actors Biswanath Bose, Ipsita Mukherjee, Diya Chakraborty and Ratri from the old favourite serial Subarnalata in this episode. 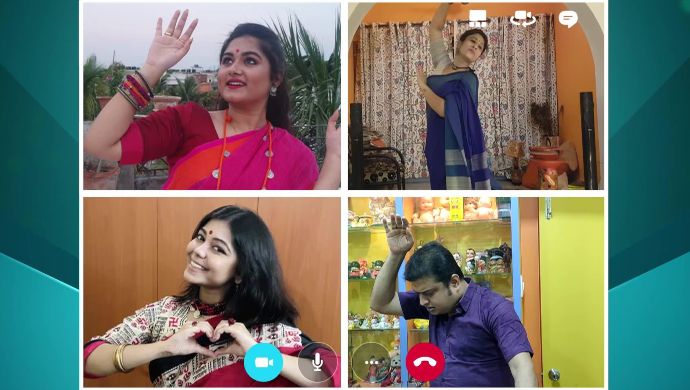 First, host Debjani calls up actor Biswanath Bose, who is in his kitchen, and claims that he is a great chef and there is nothing that he cannot cook! However, when he serves his kids lunch, they are dismayed by the fact that he has forgotten to add salt to the dal! His wife adds that the other day when he made payesh, neither was the rice in it cooked nor the dessert the slightest bit sweet! Debjani then tells him to stick to what he knows best, that is, acting, instead of trying to cook.

After their meal, as his wife sits and draws scenes from nature, Biswanath sings us a Bengali song about lakes and rivers, which everyone appreciates! When she sketches a heart, he sings us a Hindi song about love! He and his wife continue this amazing streak, and then, Biswanath tells about how his credibility as an actor improved after acting in Subarnalata. Then, Debjani video-calls actor Ipsita Mukherjee, who is eating mangoes at home!

Ipsita had been acting in Subarnalata from an early age, and became very emotional on the last day of shoot. Biswanath and she reminisce about their experience working on the show, and then Debjani wonders what actor Diya Chakraborty, who also appeared on this show, is up to. We find Diya at home enjoying a snack (also mangoes), on her sunny terrace.

Debjani then sets Ipsita and Diya a challenge to pronounce some tricky tongue twisters about mangoes which Biswanath gives, which both of them trip up on hilariously each time! Next, we suddenly see that Biswanath has a blindfold on his eyes, as Ipsita and Diya want to see him play Blind Man’s Buff, a favourite game from our childhood, with his kids! He obliges and a fun session ensues with his kids in their living room. Then, Debjani calls up actor Ratri who has also appeared in Subarnalata.

Ratri Di tells us a funny story about how Biswanath had promised to treat her to homemade biryani, but has still not delivered! To extract revenge, she prepares phuchka at home and makes sure that Ipsita and Diya do too, and they all enjoy their creation in front of him while his wife gives him a glass of korola juice to down! Then, Ipsita, Diya, and Ratri perform a dance together and later, Biswanath joins in too!

What did you think of this episode of Priyo Tarakar Andarmahal? Tell us with a comment below.

Alo Chhaya: Catch Up With Alo And Akash And Watch Them Complete Amusing…

Check Out What's Happening In Krishnakoli Now On ZEE5 .