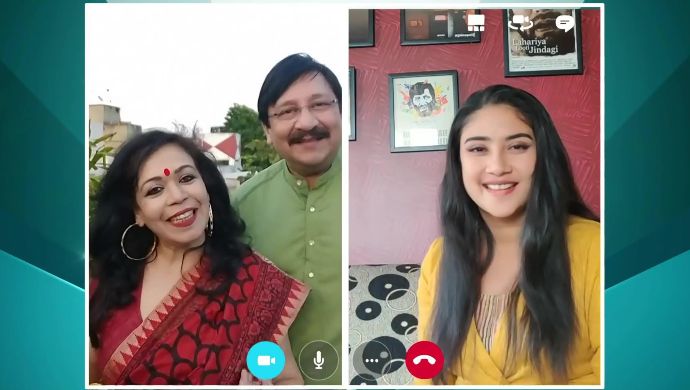 In this episode of the Zee Bangla TV show Priyo Tarakar Andarmahal, we catch up with three married couples from Tollywood. First, host Debjani calls up actor Debolina Dutta, who starred in the classic Bengali serial Ek Akasher Niche. She is making a cup of coffee for her husband, actor and director Tathagata Mukherjee, because she lost a game of carrom to him! Watch the episode here:

We then find out from the two that they first met on the set of the serial Choukath, which they were both acting in. They were the best of friends for many years before their romance began and then led to their marriage.

Next, Debjani video calls Arjun and Nilanjana Chakraborty, who have been happily married for many years now. Arjun Chakraborty is an actor and director who has appeared in films like Antardhan and Ankush. They too, tell us their wonderful story of how they met. Arjun would go to exercise in the society campus, opposite which Nilanjana’s family lived. Nilanjana would study at her balcony and Arjun would work out in the gym, and he asked for her landline number and got it! Thus blossomed their romance which has continued through the years.

The two couples discuss their interests and chat with each other and then, Debjani calls up another famous couple, actors Dolon Roy — who has acted in Sajani Go Sajani — and Dipankar De, who has appeared in many films including Dotara. They confide that although the lockdown has brought with it lots of domestic work, the bright side is that they have never had the chance to spend so much time together before it!

Dolon and Dipankar (Tito Da) tell us that their romance commenced in the US when they had gone to work in director Rabi Ghosh’s show for three months. He wooed her with letters and poetry, which she still treasures. Dolon had the poems published shortly after as she could not resist.

Then, Debjani challenges Arjun to sing a song while Nilanjana cooks a dish in the kitchen. He sings a Hindi song, and everyone appreciates it. Meanwhile, Nilanjana finishes cooking and brings some of the food over to the living room to share. Then, Debolina goes up to her terrace and performs a dance to a Bengali song for us.

The episode ends with Dolon reciting one of Dipankar’s poems for us, and Dipankar and all the other couples participating in a singing challenge and singing merrily along.

How did you like this episode? Let us know in the comments below.

Basu Poribar: Get Ready For This Film By Suman Ghosh To Light Up Your Screens At…

Stay updated with your favourite serial Alo Chhaya only on ZEE5.

Watch The Prosenjit And Rituparna Sengupta Starrer Drishtikone On ZEE5.