This episode is lots of fun with actor and dancer Indrani Dutta, as well as actor-singer Arindam Ganguly, his wife, Kheyali Dastidar, and their kids. 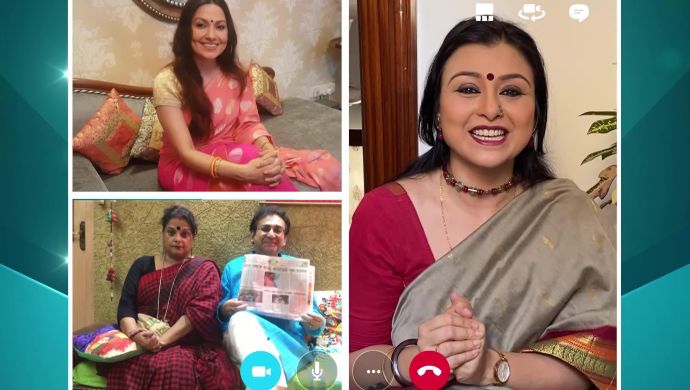 This episode of Priyo Tarakar Andarmahal starts with the host, actor Debjani Chattopadhyay, performing a dance at her home. She is joined by actor and dancer Indrani Dutta, who has previously acted in films like Papi and Ladai, on video call.

Indrani tells us that she enjoys dancing and acting equally, and is grateful for the platform she is able to get for performing.

Next, Debjani calls up actor and singer Arindam Ganguly, who has appeared in Rudrabeena, and has given us numbers like Garoyal and O Nadire Tui. We find him being scolded by his wife, actor Kheyali Dastidar of Path-o-Prasad fame, who is reminding him he needs to replenish the groceries and help out with work around the house. She has broken her fingernails from washing dishes and sundry other household chores, but joins us for a session of adda. Debjani wants to hear their love story, which Kheyali confides certainly did not start at first sight for her!

Debjani sets the pair a challenge — Kheyali has to prepare laddoos while Arindam sings a song for her. They both completely this successfully, and then their son, Aditya, joins them. Aditya tells us about working on his first film, Projapoti Biskoot. Then, Indrani and her daughter Rajnandini, perform  a dance for us.

Next, the mother-daughter duo, who are also the best of friends, complete a challenge where Rajnandini identifies the song that Debjani is referring to and sings it, while Indrani sorts her jewellery and puts them together. Then, Rajnandini sings us a Rabindrasangeet very melodiously. Then, Kheyali and Arindam have to fulfil another task where the former makes mango juice while the latter sings us a song!

They all chat and share stories, such as Kheyali and Arindam’s ‘familymoon’, because apparently Arindam’s family had tagged along on their honeymoon! Debjani is amused by Kheyali’s jibes at her husband, and says that she is winning all the rounds today! The episode closes with Rajnandini and Aditya competing to skewer pieces of spiced and diced potatoes with a toothpick using only their mouths, and then eating them!

Did you enjoy this episode of Priyo Tarakar Andarmahal? Let us know in the comments section below!