Host Debjani joins in by dancing with the other guests, actors Shweta Bhattacharya, Tumpa Ghosh, and Sanghamitra Talukder in this episode. 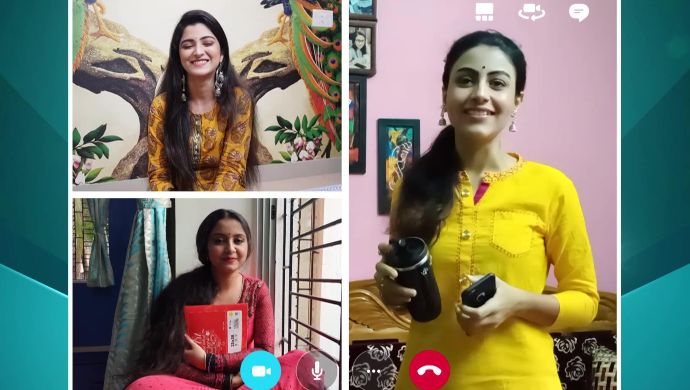 In this episode of Priyo Tarakar Andarmahal, Debjani first calls up actor Shweta Bhattacharya, who has starred in Bidhir Bidhan and serials like Raage Anurage. She is dancing in her room and is so wrapped up in it, that she doesn’t even realise she is on screen! She is also a seasoned dancer and choreographer, and has previously appeared in Dance Bangla Dance.

When Shweta finally spots Debjani, she chats with us about her love for acting and dance, and tells us how it all started in her childhood. She wanted to help her parents out and fulfil her dreams too. She had been dancing with her soft toys whose names Debjani wants to know, but it turns out that she has not named them. So Debjani helps her name each and every one of them! Debjani then  calls up actor Tumpa Ghosh, who has also acted in Raage Anurage. We find her making a sandwich and is just about to eat it, when she joins us.

Tumpa also chats about how she started acting at an early age, and she is also a great dancer, just like Shweta. Then, Shweta performs another dance for us on her terrace, which is much appreciated. Then, both Debjani and Tumpa join in and they all dance together!

Next, we hear about how much Tumpa loves to sleep, and she would often fall fast asleep on the set of Raage Anurage, blissfully unaware of all the teasing around her. Once, somebody managed to take a picture of her and post it on social media unbeknownst to her! She shows us some of her artwork, which has been spending time doing at home.

Then, Debjani connects actor Sangahmitra Talukder, who has appeared in the serial Aamar Durga. She has climbed her mango tree, and is collecting mangoes from it.

Then Debjani sets all three of them a challenge to make chocolate milkshake which they rush to do in their respective kitchens. All of them do it, and enjoy their delicious treat as a reward. Then, Sanghamitra tells us about the time that she played the Prime Minister in Aamar Durga, and many of her viewers thought that she was the Prime Minister in real life! Then, Debjani plays a series of songs from her phone which both Tumpa and Shweta keep dancing to!

After this, we meet Shweta’s parents who entertain us by playing the tabla and singing for us! The episode closes with the guests requesting Debjani to dance with them, which she does!

What did you think of this episode? Tell us with your comment in the box below!

For more entertainment, watch the epic blockbuster Asur on ZEE5.