In this episode, we have a session full of fun and song with singers, Ani, Emon Chatterjee, Durnibar Saha, and their wives. 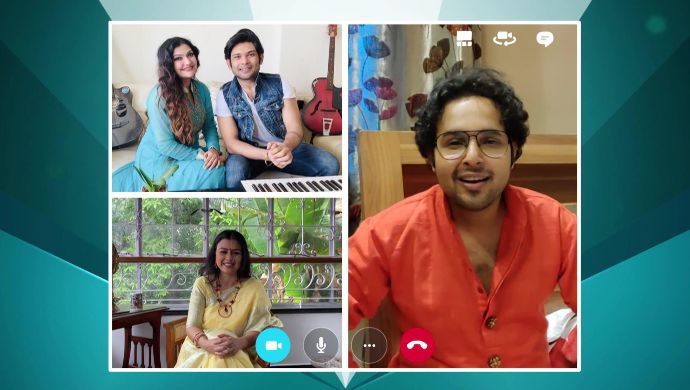 In this episode of Priyo Tarakar Andarmahal, host Debjani tells us it will be a musical special, as she proceeds to call up the couple Ani and Debolina in Mumbai, who are accompanied by their little daughter.

Ani is a singer who has appeared in the popular music reality show,  Sa Re Ga Ma Pa, and tells us that lockdown has been spent in a flurry of domestic chores and music. He breaks into song from time to time, and he sings just like an angel!

Then, Ani enters his kitchen and whips up a delicious shorshe ilish preparation in front of our eyes. Debjani then connects the famous Bollywood singer Emon Chatterjee to the call. Emon has given us hit pop numbers like Saathiya and Baare Baar.

Emon Chatterjee strums on his guitar and also sings us a song, and we can tell that Debjani has chosen some very seasoned musicians for today’s call. We learn that Emon has been spending lots of his time with his parents at home, but has just had a tiff with his mother and wants Debjani to help him make it up to her. Debjani welcomes his parents and tells them of this plan! Ani sets Debolina and Emon’s mother a challenge to prepare the dough for some luchi within a short span of time, and Emon’s mother manages to complete this first.

Next, Debjani calls up the singer Durnibar Saha and his wife, as Emon’s mother has requested to hear him sing the Bengali song Poth Harabo, which he willingly sings for us rather melodiously.

Post that, Ani tells us about his and Debolina’s love story, which started off with Debolina being a big fan of his and wooing him. Durnibar tells about his, which started when his now wife, Meenakshi, sending him a friend request on Facebook in true millennial style!

Then, Emon sets Debolina and Meenakshi a challenge where they have to place a sheet of paper on their respective husbands’ back and draw a picture, and they have to guess what their wives are drawing and imitate what it is they think they have drawn, on a different sheet of paper in front of them. This turns out to have some hilarious results!

After this, Debjani sets all the singers a singing challenge, where she gives them a word and they have to sing a song with it in it. Ani, Durnibar and Emon are quick to rise to the occasion and deliver performances of one popular hit after another, which is a lot of fun! The episode closes with Debolina and Meenakshi performing a dance for us, and Emon singing the title song from the movie Kal Ho Na Ho.

What did you think of this episode? Tell us in the comment section below!

Get Up, Get Going! 5 Upbeat Numbers You Need To Put On Your Saturday Workout Playlist