Priyo Tarakar Andarmahal 28 April 2020 Written Update: See What Netaji Actors Are Up To

In this episode of the lockdown-based show, host Debjani calls Abhishek Bose, Sriparna Roy, and Dhrubo Sarkar, who star in the hit serial Netaji. 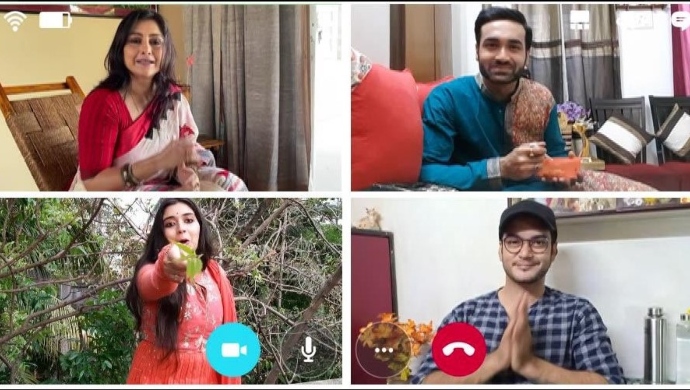 In this episode of the latest Bengali TV show Priyo Tarakar Andarmahal, Debjani, the host of the show first takes us to meet Abhishek Bose, the actor who plays the titular character in the Bengali serial Netaji. Abhishek tells us how he has been spending his time — drawing, singing and helping his mother with household chores.

Watch the second episode from the series here:

Abhishek shows us this beautiful painting he has made of the mythological character Sri Ram Chandra. Have a look at it here:

He then tells us about his parents and how they have instilled the values of discipline and self-reliance in him from an early age. His father was a professional football player in his youth and would wake up at around 3 a.m. to walk all the way into the city to practice the sport in the football field. He was also passionate about art and music, and it is he who has influenced Abhishek’s interest in the same. Abhishek recalls how his father would wake him up at 4 a.m. in his childhood days to practice singing and playing the harmonium while complaining that 15 minutes of groggy practice wasn’t cutting it. He then goes on to demonstrate the fruits of this routine by singing a Bengali song beautifully while playing the harmonium. He also introduces us to his parents who are drinking tea while watching the news.

Debjani then connects us to Sriparna Roy, who plays Bibhabati in Netaji. She is playing the board game Ludo with her father when called. Her father wins the game and Sriparna rues that she will have to wash the dishes again upon losing. Debjani then gives Abhishek and Sriparna a singing challenge. Each of them will have five seconds to come up with a song that has a specific word in it in the first line. They both perform excellently in this and neither loses. Sriparna then shows us her hidden talent, which is dancing.

Sriparna then takes us around her house, which is surrounded by lush greenery. She picks up two coconuts which she finds, to take inside and eat. Debjani then calls Dhrubo Sarkar, who plays the role of Sarat Chandra Bose in Netaji. He is enjoying a snack, and Sriparna teases him saying she knew he would be eating, because he loves eating something constantly. She then reveals that Dhrubo is also into grooming himself a lot, by doing his hair and eyebrows. Because of her unrelenting leg-pulling, Debjani announces a challenge between Sriparna and Dhrubo. They have to put pillow covers on their cushions and pillows as fast as possible. Sriparna is delighted to win this contest, and as her prize, she orders Dhrubo to do 10 push-ups. Dhrubo then goes to his kitchen to make maachher jhol.

Meanwhile, Abhishek tells us how his journey of acting began, with a play called Jhalapala in school. Sriparna too, reveals how she started dabbling in acting in school upon being gifted a digital camera. She also shows us the sarees and jewellery that her late mother left her, and says that those are what keeps her mother’s presence alive still. Dhrubo too, misses his mother who lives far away, and has prepared the maachher jhol in the style that she usually does.

Abhishek closes the show with a message to the audience. He asks everyone to stay safe, cautious and clean, and to have faith that we will indeed overcome this crisis ultimately.

What did you think of this episode of Priyo Tarakar Andarmahal? Feel free to leave your comments below.

Comic Relief: 4 Funny Moments From Asur That Stand Out For Their Humour