On the third episode, we visit actors like Gourab Chatterjee and Ditipriya Roy who star in the award winning Bangla serial. 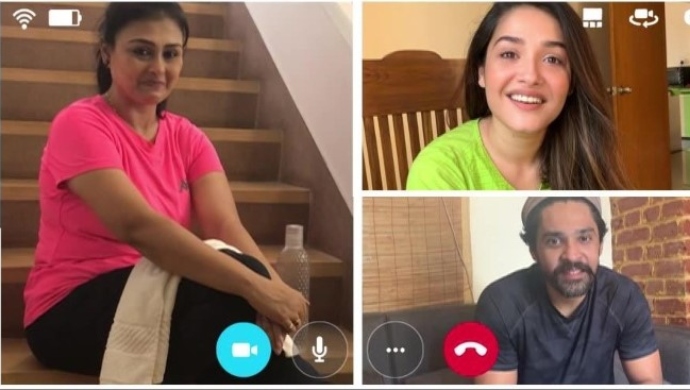 This episode of Priyo Tarakar Andarmahal opens with host Debjani working out and doing some yoga exercise by herself on her terrace. She explains the importance of staying fit during this time, and then tells us she has a surprise in store for the audience.

We then see actor Gourab Chatterjee, who plays Mathur Babu in the popular serial Rani Rashmoni working out and lifiting weights at his home. He pauses to sit and talk to Debjani and mentions he would have dressed up if he knew she would be calling. Debjani asks him if he misses Jagadamba (played by Roshni Bhattacharya), who is his wife in the serial. He admits he does quite terribly, and then Debjani calls Roshni, to find her relaxing with slices of cucumber over her eyes! It is quite the reunion when Mathur Babu and Jagadamba meet each other after a long time, albeit through video call.

Roshni tells Gourab that she hopes he has been keeping well and cleaning his room properly! Gouran then takes us around his room and proudly shows off how neat it is. Debjani then interjects to exclaim that the two have forgotten she is there, which they deny profusely. She then asks Gourab if he can cook, to which he says not really. Roshni swiftly calls him out on what she calls a blatant lie, and tells us that he cooks everyday, and would bring food that he had prepared to the set and make everyone else eat it.

The two start squabbling, so Debjani calls Ditipriya Roy who plays the great Rani Rashmoni herself, to keep the peace. Ditipriya sets Roshni a task as punishment– to make a sketch within five minutes while Gourab has to do pushups. They complete this, and then everyone takes a quick break.

We come back to find that Debjani has freshened up and Roshni is cooking a grilled chicken dish. Gourab plays some melodious guitar for us. He tells us that he started acting during 12th grade in school when he got his first call to audition. Everyone agrees that they miss shooting on set terribly and cannot wait for this crisis to pass. Debjani then calls Gazi Abdun Noor, who plays Raja Chandra Das in the serial.

He is watering his plants at the time he is called. He sets Gourab and Roshni a challenge to play Antakshari and sing songs. He too, sings beautifully after leading us into his kitchen. Roshni tells Noor Da to put his work aside for now. Ditipriya joins us again after tidying up her books. She is delighted to see everybody who is on the call. Noor sings us another song on request for her. Debjani springs another surprise on everyone by calling up the famous playback singer Raghab Chattopadhyay, who ends the show by singing a song in signature style. Debjani states that a special music album should be cut for the show.

Did you enjoy meeting the cast of Rani Rashmoni during lockdown? Tell us what you thought in the comments below.

EXCLUSIVE: Don’t Have It Easy, I Also Audition Like Everyone Else, Says…

Watch Chaya O Chhobi, an intriguing film where the lead actress of a movie that is being shot mysteriously disappears.

Beyond Acting: 4 Tollywood Stars Who Are Also Talented Artists