Dedicated to love, this episode lets us catch up with the actors Om Prakash Shahani, Mimi Dutta, and Rohan Bhattacharjee. 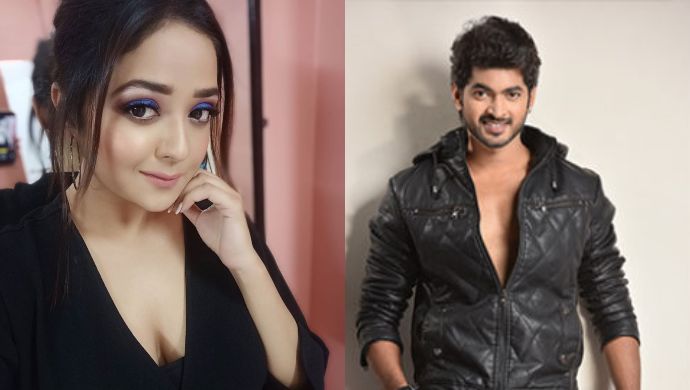 In this episode of the Zee Bangla TV show Priyo Tarakar Andarmahal, host Debjani takes us to the house of actors Mimi Dutta and her partner, Om Prakash Sahani. The two had met on the set of the Bengali TV serial Alor Basha, and fallen in love at the time that they were both working on it. Om and Mimi are filming a thriller short film in their apartment when Debjani calls them.

Watch the episode below:

Om and Mimi both take turns to perform very entertaining dances for us on their terrace and then, Debjani video calls actor Rohan Bhattacharjee, who has acted in the film Mon Sudhu Toke Chai. He tells us he is really missing his girlfriend Sreeja during the lockdown, and had it not been for it, they would have been holidaying in the mountains together!

After this, we witness a cupcake decorating challenge between Mimi and Om, while Rohan asks them questions about each other that they must answer correctly. Om pretends to forget Mimi’s birthday momentarily when asked when it is, and this infuriates Mimi until he finally bursts out laughing and tells us the correct date. He asks her how he would forget if he has been organising her birthday parties all these years.

Then, Debjani gives Rohan a challenge in the kitchen where he has to identify all the spices as quickly as possible. After completing this, Rohan tells us all about the love of his love, Sreeja, and how much he wishes he could be with her again. He reminisces for a while and then Debjani inevitably sets everyone another challenge! She plays a song on her phone, and sets each of them a task to complete while dancing to it! Mimi and Om cuts vegetables while grooving to a Hindi song. The episode closes with a grand performance of Om and Mimi dancing to the song Bole Chudiyan from Kabhi Khushi Kabhi Gham.

Did you enjoy this episode? Tell us in the comments below!

Check Out What's Happening In Krishnakoli Now On ZEE5.