This episode with Sandipta Sen, Debaparna Chakraborty, Adrija Roy and Rahul Arunoday Banerjee has us rolling on the floor with laughter. Check it out! 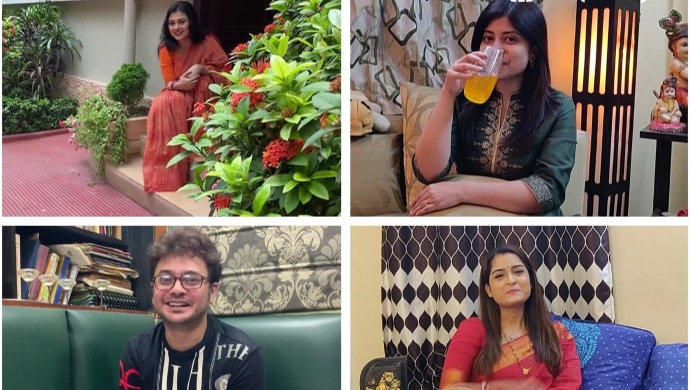 This episode of Priyo Tarakar Andarmahal starts with the host, actor Debjani Chattopadhyay, reflecting on the fact that it has been over a month since the lockdown was first announced. She shows us how she has been taking this time to write in her diary, before video calling actor Sandipta Sen, who she has heard has hurt her foot.

We learn that Sandipta is completely fine, and has been practicing dance regularly. She is about to share a story from her childhood, then realises that her parents would love to reminisce with her, so she takes us to meet them. Her father sings a Rabindrasangeet. Sandipta tells us a story of how she had gone for a holiday to the beach with her parents, and a huge wave at sea separated her from the lifeguard, throwing her in a state of panic. Notwithstanding this incident, she developed a strong affinity towards adventure sports of all kinds, including skiing and riding camels. She reveals how her parents supported it too, and taught her to be brave and self reliant.

Debjani then connects us to actor Debaparna Chakraborty, who got married recently. She tells us how her honeymoon had to be postponed because of the lockdown. We learn that she has been cooking for her family at home. Sandipta challenges her to demonstrate her cooking skills by making her chop vegetables at a record speed.

We then meet actor Rahul Arunoday Banerjee, who has just been listening to the famous Hindi song Piya Basanti Re by Ustad Sultan Khan and K. S. Chithra. He tells us how Sandipta often chooses to sing songs at the top of her voice, much to his chagrin. Sandipta in turn, reveals how he often pulls pranks on her on set, like hiding her phone. She then proceeds to sing the song Lagja Gale rather tunelessly, after which Debjani teases that Rahul is right. Sandipta wants to extract her revenge by setting Rahul the task of tidying up his books, which he obliges, quite fast.

Next, we meet actor Adrija Roy, who Debaparna is surprised to see has remained quite fit, despite her love for eating her favourite food all the time. Adrija sings us a song, after which Sandipta threatens to sing another one.

The show closes with Rahul setting Sandipta, Debaparna and Adrija the challenge of dancing with random objects in the house as their partners! With a broom, a shirt, and a pillow in tow, they fulfil the task quite well, making for an entertaining experience!

What did you think of this episode? Tell us in the comments below.

Top Of The Charts: 11 Favourite Movies Streaming Now That You’ll Want To…

Love to cook? Try these delicious recipes from Rannaghar.

Patalghar, Sudakshinar Saree: 11 Favourite Films That You Need To Watch This Week