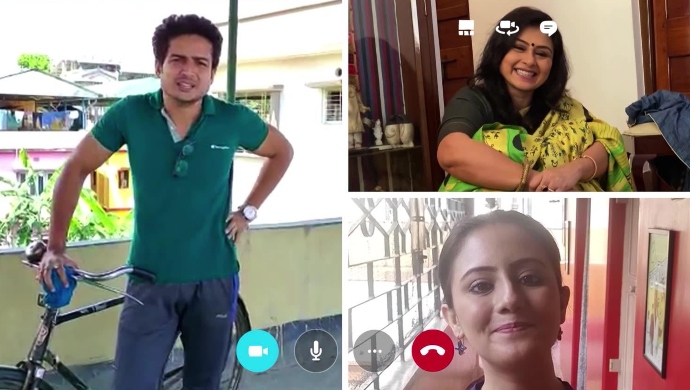 In this episode of Priyo Tarakar Andarmahal, host Debjani graciously connects us with the stars from the popular Bengali TV serial, Nakshi Kantha. First, we meet actor Manali Dey, who is seen dancing at home when we first meet her.

She is happy to see Debjani and informs us that she has been waking up late, cooking, spending time with all her family members and playing board games like Ludo during the lockdown. She tells us she misses shooting, and the company of her colleagues from the serial on the set.

Manali calls up Suman Dey, who plays Jash in Nakshi Kantha. He is at home in Siliguri, and we find that he is just back from a trip to the medical store, and was careful enough to remember to wear a mask!

Suman shows us his bicycle, which has been passed on to him by his father. There are many memories tied to it, and he loves it and makes sure to take care of it. He tells us that he stays quite busy at home during the lockdown. He helps his mother with her chores, has deep conversations with his older family members, and especially loves playing with his young nephews! He has not been able to stay at home for this long since his Madhyamik examinations, so is making the most of it despite missing shooting very much. He tells us a spooky story where he had gone out late at night on his bike with his friends, and thought they saw a creepy figure looming ahead. His connection breaks just as he is mid-story, and so Manali calls Sneha Chatterjee Bhowmick, who plays Rohini in the serial.

Sneha requests Manali to perform a dance for us, which she does marvellously. We then learn that Sneha is a fantastic singer, and on everyone’s behest, graciously demonstrates her talent by singing a Bengali song which everyone appreciates.

We then get back Suman on the call, who continues his story. Indrajit Chakraborty, the actor who plays Debdeep, is next to join us on call. He is doing push ups when we first meet him, and he tells us how he misses playing Ludo with his colleagues! Sneha tells us about all the different delicious dishes that she has been learning to cook from her mother. At this, Manali  discloses how much she misses her mother at this time, and cannot wait to see her again.

Indrajit and Debjani set the other stars a challenge where the two of them provide clues while the rest have to guess what the song is within five seconds. Manali wins, and sets Indrajit and Sneha a challenge where the former has to keep doing push ups and the latter has to keep cutting as many potatoes as possible within the allotted time. Hilarity ensues, but they complete. Sneha sings us another song. We then meet the surprise guest, the famous singer Rupankar Bagchi, who also sings us a song!

What did you think of this episode? Tell us in the comment below!

Birthday Special: 10 Styles By The Stunning Actor Swastika Dutta That Will Floor…