Catch up with actors like Ushasi Ray, Sreyoshi, and Manoj Ojha and watch them complete various entertaining challenges! Look out for a special guest! 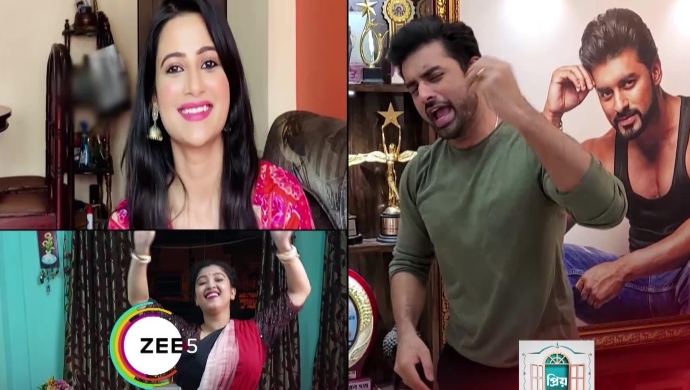 The episode of the latest Zee TV show Priyo Tarakar Andarmahal opens with host Debjani taking a moment to remember our frontline workers, especially the women doctors who are working overtime during the lockdown and are not able to go home to their families. Speaking of doctors, we remember Dr Kadambini Ganguly, one of the first female doctors who broke norms to enter the profession. Debjani then calls actor Ushasi Ray, who plays the titular protagonist in the latest Bengali serial Kadambini.

Ushasi tells us that she has been spending a lot of time with her family and reading, mostly about the historical character of Kadambini that she is portraying in the serial. She also misses shooting, but above all, her friends and colleagues from the set.

Debjani then calls Sreyoshi, who also acts in the serial. We find Sreyoshi to be cooking aloo dum in her kitchen, and tells us that she plans to fry luchis after this. However, she laments the fact that she finds it very difficult to measure out the flour required for it accurately and asks Ushasi for help. Ushasi reveals that she hates cooking! Debjani says that she will not receive any help, as that will be her first challenge — to prepare the dough for five sets of luchi from scratch within a given time. She completes this successfully.

Next, Debjani makes Ushasi sort the vegetables that have just come in from the grocery store. She reminds us that Kadambini had to juggle all kinds of domestic chores along with her medical practice, and Ushasi relents. Debjani instructs her to select the vegetables to make a shukto –– but within only 20 seconds! Despite complaining, Ushasi manages to do this. After this, Sreyoshi discusses her roots in acting, which started after going on a reality show. She performs a dance routine for us after telling us how she had taken lessons. Ushasi then feels like drinking coffee, and whips up a cup of the trendy Dalgona coffee. She is extremely surprised by how well it turns out!

Debjani then connects us to actor Manoj Ojha, who plays Kadambini’s husband in the serial. He tells us about how acting started for him, that is, from a knack for trying out different voices and delivering dialogues, which he loved doing even as  a child. He shows us a few different voices too, and they are very funny. He even demonstrates different animal sounds like cats for us!

Debjani then conducts a challenge for them all, where she gives them clues describing a scene from a Shah Rukh Khan film, and they have to guess which one she is talking about. After this, she reveals the big surprise, which is the special guest Ankush, the actor who is a judge on the reality show Dance Bangla Dance. He tells us that he is spending this time at home with his family, but can’t wait to get back to work after lockdown!

Debjani then sets a dance challenge for Sreyoshi which she accepts, on the condition that Ankush matches her steps! She dances up a storm and Ankush repeats her steps and gives her a score of 100 for her performance!

What did you think of this episode? Tell us in the comments below.

Love To Cook? Try These Tasty Recipes From Rannaghar Only On ZEE5.