Promo Review: Khirer Putul Will Charm Us With Its Magic, Beauty And Drama On Screen

The classic fantasy novel from our childhood is coming to life in a new serial on ZEE5, starring Sudipta Roy and Suman Dey. Check out the new promo! 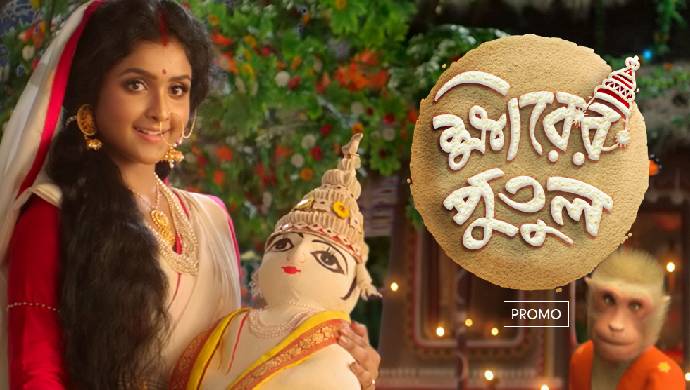 Khirer Putul, written by Abanindranath Tagore and one of the best-loved fairy tale novels from our childhood, will soon be telecast on Zee Bangla. In the story, the King of Deepnagar has two queens– Duorani and Suorani. He favours the latter and gives her the best of everything, including seven palaces, 700 maids and all the most splendid jewellery. However, he treats the protagonist, Duorani, as inferior and only gives her a ramshackle house, a mute and deaf maid and a dirty bed. The tale follows her fate and involves a khirer putul (a doll made out sweet milk) and an extraordinary monkey who talks and is very clever.  The second promo of the upcoming serial, starring Sudipta Roy and popular Zee Bangla serial Nakshi Kantha‘s Jash aka Suman Dey, has just been released. Check it out here:

The promo shows us the kingdom the story is set in, one of splendour and magnificent riches, with the king’s men riding around on grand galloping steeds. We see Suorani plotting and planning against Duorani, whom she hates and is deeply jealous of, despite the fact that she is treated so poorly by the king. Her insecurity is fuelled by the thought that Duorani will give birth to a son who will become the prince. She is keen to prevent this and cackles with laughter thinking about her evil plans. Meanwhile, we see Duorani living her humble existence and praying to a Goddess, and asking where her prophesied Golden Son will come from. We then see the blessed magical monkey appears, tugging at her sari and greeting her.

The monkey goes on to become her companion and advisor, and we see the Goddess respond to her query by assuring her all will fall into place. In a scene from the future, we get to know that actor Suman Dey, who plays Jash in the hit serial Nakshi Kantha, and we couldn’t be more thrilled! He will play the other leading role of the King who romances Duorani, who is dressed in finery and finds the love she has been missing.

How excited are you to see the beloved classic on screen? Let us know your thoughts in the comments below.

Monday Motivation: Promita Chakrabartty's Tip To Start Off Your Day The Right Way

Force, Drishtikone: 6 Bangla Blockbusters You Can Now Watch For Free On ZEE5