Quick Recap: Let’s Take A Look Back At How We Became A Republic

As we celebrate the 70th Republic Day, here’s a throwback to how we got independence from the British. Details inside. 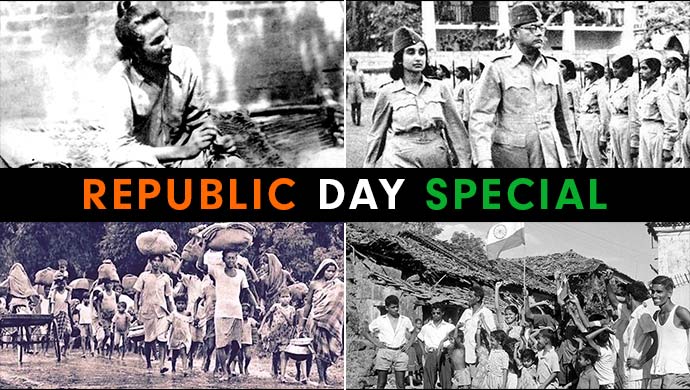 The Indian freedom struggle was one of the most unified movements that ultimately ended in us getting freedom from British rule. The freedom movement in Bengal needs notable mention, as many key movements which started or happened there had a direct result in the nationwide protest for freedom. Watch the ZEE5 Pledge: Republic of Entertainment, below.

Here is a timeline of all the key events that happened in Bengal and across India.

The first revolt: The Sepoy Mutiny or Revolt of 1857 was the first major protest held throughout the country. It started in the cantonments of Barrackpore near Kolkata by a soldier called Mangal Pandey. Despite being unsuccessful, this was the first major uprising in India. This movement led to many more key events in the history of Indian Independence.

The Partition of Bengal: Back in the day, the Bengal province comprised a large area. It included the present areas of Odisha, Assam, Bihar, etc. The Britishers were unable to manage everything in terms of administration, and therefore divided the whole province into two parts terming it as administrative reasons in 1905. However, their motto was to divide the Bengalis who were putting up a united front to fight the British. This sudden partition led to radical nationalist movements throughout the country. Many different regions rallied in support for Bengalis and this is the first movement that made Britishers fear the power and unity of Bengal.

The entry of Gandhi: Mahatma Gandhi, post his success as a lawyer in South Africa, returned to India. He was welcomed and introduced to all the leaders of the Indian National Congress who then inducted him as an advisor and the de facto leader. His non-violent approach, Satyagraha, spread throughout the country and everyone rallied behind him, protesting peacefully. He was considered a major threat by the British Government and was imprisoned multiple times. This never deterred him and this gave strength to more people to join the movement for freedom.

Khudiram Bose’s death: After the British began oppressing the freedom to communicate through the print medium, there were many cases on journalists and editors. Douglas Kingsford, the Chief Magistrate of the Presidency Court of Alipore, was overseeing the cases and giving strict punishments to them. Khudiram Bose, a mere 16-year-old, along with Prafulla Chaki, tried assassinating him more than once. On the second attempt, their assassination attempts killed Mrs. Kennedy, the wife of a British barrister, Pringle Kennedy. This prompted the police to capture him. He was caught and the whole country witnessed a strong and resolute teen who stood his ground for the countrymen. After two trials, he was punished with a death statement and was martyred in 1908. A huge crowd came to see the brave nationalist in his last moment and witnessed him die with a smile. This filled everyone with the bravery to act.

The women take charge: While many men, be it youngsters and teens, took charge to fight against the Britishers, women too began to participate in the freedom movement. Women like Matangini Hazra, Nellie Sengupta, Bina Das, Sarojini Naidu, Captain Naxmi Sehgal and many others fought hard to oust the British. Notable names were Matangini Hazra and Bina Das. While Matangini Hazra followed the non-violence approach of Mahatma Gandhi and participated in all the key Gandhian movements like Quit India, Salt satyagraha, etc., Bina Das depicted her bravery when she attempted to assassinate Governor Stanley Jackson. These ladies paved the way for all women to take action and participate in the countrywide protests. Netaji’s Indian National Army too had a women regiment which fought against the British.

The entry of youth: With the strong leadership of Subash Chandra Bose, the youth began to be motivated into the freedom struggle. Binay, Badal and Dinesh are the most well-known names that pops-up. Others like Bhagat Singh, Sukhdev and Rajguru are also well known. In Chittagong in modern-day Bangladesh, Masterda Surya Sen mobilised many youngsters to lead an armed struggle. These simple and small moves led to a huge movement soon.

Quit India Movement: Each of these separate struggles and fights became more unified and stronger. This drove to a single-minded approach towards independence. Gandhi and Jawaharlal Nehru rallied to united call for driving the foreign forces away to which everyone responded. The entire nation voiced their opinion and asked the Britishers to Quit India in 1942. Their efforts were noticed by the Crown and the pressure to leave the country kept growing. This intense movement led the whole country to a stronghold belief of achieving the freedom that they deserve. And on 15th August 1947, after continuous attempt and protests, we achieved independence. And on January 26, 1950, we became a Republic.

Republic Of Dance: Stay Entertained On Republic Day With These Amazing Dance…

Watch the mystery behind Lal Bahadur Shastri’s death in The Tashkent Files, now on ZEE5.

Watch The Bravery And Valour Of The Indian Army In Uri: The Surgical Strike On ZEE5