Quick Recap: Netaji, Khudiram, Matangini…All The Freedom Fighters You Should Know Of

Thousands of sons and daughters of Bengal fought for independence. Here’s a quick list featuring some of them as we gear up to celebrate Republic Day. 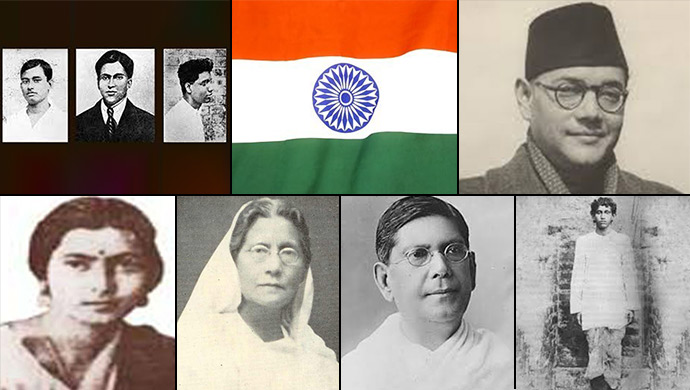 With Netaji Jayanti on January 23 and Republic Day on January 26, it is once again time to pay homage to the countless people, a lot of whom are nameless, who fought to give our country freedom from British rule. Bengal rose up in revolution and played a key role in the struggle for independence. From Netaji Subhas Chandra Bose to Masterda Surya Sen, from Matangini Hazra to Rishi Aurobindo, they all fought and even gave up their lives to get us independence. Watch Netaji fight the British in the latest episode of Netaji below.

Meanwhile, we got you a quick recap of some of the freedom fighters who were born in the soil of Bengal, and who made us proud:

Bina Das: A notable freedom fighter, Bina Das set the standard for female nationalists. She was known for her bravery and boldness. She tried to assassinate the then Governor of Bengal province, Stanley Jackson, in the Convocation Hall of the University of Calcutta. Despite not succeeding in her attempt, she was arrested for this. Post-release, she joined the Congress party and went on to participate in many more movements.

Benoy-Badal-Dinesh: Benoy Krishna Basu, Badal Gupta and Dinesh Gupta — the trio of nationalists whose names remain etched in people’s minds, are celebrated till this day. They shot the then Inspector General of Prisons, General N.S. Simpson. In order to commemorate their valour, bravery and martyrdom, Dalhousie Square in Kolkata was renamed as BBD Bagh.

Chittaranjan Das: Chittaranjan Das, famously known as Desh Bandu, was a key freedom fighter from Bengal. From leading the Non-Cooperation Movement in Bengal to starting his own newspaper Liberty to fight the British, he managed to cover every possible ground to drive the Britishers out of the country. Later on, he went on to form the Swaraj party along with Motilal Nehru.

Khudiram Bose: This youngster along with Prafulla Chaki, were one to unite many nationalists. They attempted assassinating the then Magistrate Douglas Kingsford. Despite two failed attempts, the nation came to know the power of youth. He was publicly hanged, and became the youngest martyr of India.

Matangini Hazra: She was one of the well-known female leaders who followed Mahatma Gandhi’s principles of non-violence. She participated in all the mass nationalist movements such as the Quit India Movement, Salt Satyagraha etc.

Prafulla Chaki: Part of the Jugantar group of revolutionaries who were known to carry out assassinations against officers, Prafulla Chaki was a part of the attack conducted on Douglas Kingsford. He, along with Khudiram Bose, learnt about bomb-making and ended up killing a British barrister family. However, when at the verge of being arrested, he committed suicide.

Subash Chandra Bose: No list of freedom fighters is complete without our beloved Netaji. He was a force that the Britishers were always scared of. He was the founding member of the Indian National Army, a special armed force formed in order to tackle the British forces. From aiding the nationalists to encouraging the youth to participate in the nationalist movement, he played a key role in the freedom of India.

Masterda Surya Sen: Popularly known as Masterda, Surya Sen is best known for leading the Chittagong Armoury Raid in Chittagong (now in Bangladesh) in 1930. He was a school teacher and a revolutionary who joined the struggle for freedom as a student of Behrampore College. He even went on to become the president of Indian National Congress’ Chittagong unit. He got together a group of young and passionate revolutionaries to fight the British.

Republic Of Dance: Stay Entertained On Republic Day With These Amazing Dance Performances