The latest film by Suman Ghosh starring Soumitra Chatterjee and Aparna Sen will evoke great joy, nostalgia and sympathy -- all at the same time. 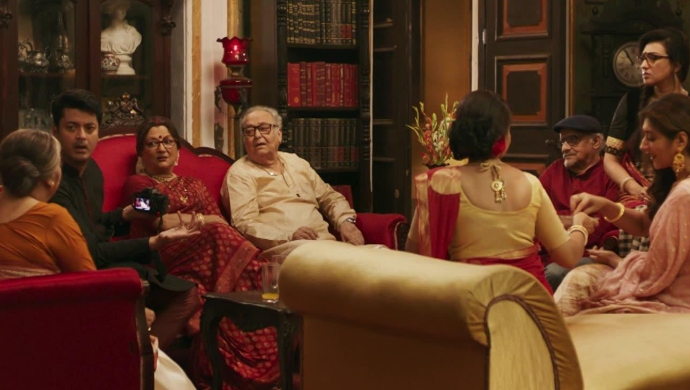 Basu Poribar, the latest Bengali film by Suman Ghosh, the critically acclaimed director, is now streaming on ZEE5. It is one Bengali film that you definitely want to watch online for several reasons! That the grand star cast boasts of the likes of stalwarts like Soumitra Chatterjee, Aparna Sen, Rituparna Sengupta, Jisshu Sengupta, Saswata Chatterjee, Sudiptaa Chakraborty, and Sreenanda Shankar, is just one of them.

Watch the trailer of the film below:

The plot of Basu Poribar revolves around the Basu family which is headed by Pranab, a retired barrister (played by Soumitra) and his wife Manjari (played by Aparna), who are preparing for the celebration of their 50th wedding anniversary. They live in a massive ancestral house in the outskirts of Bengal called Komolini, and come from a traditional and well-to-do family — a typical bonedi bari. The gorgeous old mansion has high ceilings, ancient portraits, and a sprawling uthon outside — all maintained with the help of servants and cooks that have served the family for decades. These are some of the features of such a quintessential elite Bengali household. The property echoes rich history and character in a way that will truly take your breath away and at the same time, make you wistful at the prominent signs of decay that are inevitable.

On the day of their golden anniversary, Pranab and Manjari’s children and extended family — all the people who have been invited to partake in the celebrations, start arriving. Tublu (Saswata) and his mother already live in a different section of the house and we get introduced to the eldest daughter, Mamoni (Rituparna), Raja (Jisshu) and his wife Roshni (Sreenanda), Tonu (Kaushik Sen) his wife, Pompi (Sudiptaa). The occasion also serves as a large reunion, as the entire family gathers under one roof and meet each other after years!

However, what would seem like a joyous homecoming becomes coloured with each of their personal problems coming to the fore, and terrible scandals from the past get stirred up again to create tremendous rift and controversy among them. We learn that Mamoni has hit a rough patch in her marriage, that Tonu harbours an age old secret that his wife is still kept in the dark of, and that Pranab and Manjari have skeletons in their closet that will shock anyone who has viewed their relationship to be picture perfect thus far. In fact, as much as their children love them and have wished for a married life like theirs, they too are scandalised by the revelations that come tumbling out to the surface on the fateful night that they sit down for the grand dinner.

The film flows smoothly out on the screen and will keep you riveted throughout– with its unique storyline, brilliant acting and spectacular cinematography. You cannot help but be delighted, shocked and sympathetic of the characters, in equal parts in turn. You will be reminded of the complexities that invariably come with being a part of a traditional family such as this, and the trials and perks of striving to fulfil societal expectations that often weigh so heavily down on us. You will want to marvel, revile, cry, and laugh at different scenes in the film, and this is what makes Basu Paribar so beautiful – that it will move you deeply and make you relate. The soulful music and background scores by Bickram Ghosh go a long way towards this too, so be sure to watch out for it.

What did you think of Basu Paribar? Feel free to share your opinion in the comment section below.

Watch The Jeet And Subhashree Ganguly Starrer Abhimaan Which Is Packed With Action And Drama, Only On ZEE5.