It’s going to be a starry affair on Dadagiri Unlimited Season 8 this weekend. We tell you who all are coming. 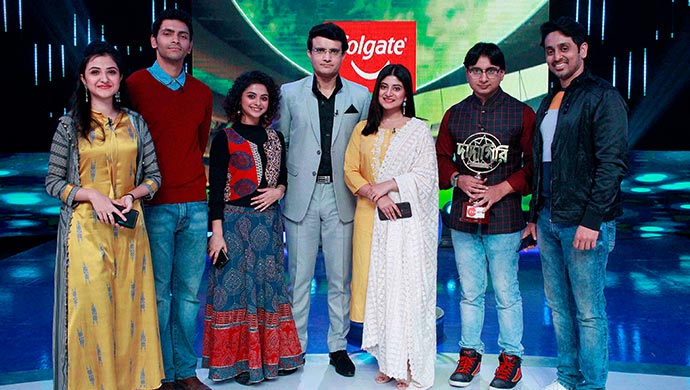 Ever since its launch in 2009, Dadagiri, hosted by Dada aka Sourav Ganguly, has become a huge hit with the audience. The show is known for its quirky format which will really challenge your grey matter. Considered to be one of the most memorable Bangla quiz shows, it is currently in its eighth season. Watch Dadagiri Unlimited Season 8 here:

Six districts are represented by six participants – who could be a common man like you and I or a celeb on special episodes. The first episode of 2020 brings in the stars once again. The latest promo promises to live up to your expectations.

This week’s episode features six new Bengali stars who have managed to win the hearts of many, with their stellar performances in different shows and films, through the years. The trailer features actress Aishwarya Sen, whom you have seen in Shubho Drishti, along with heartthrob Arjun Chakraborty, who starred in the ZEE5 Original film Satyameva Jayate. Apart from them, viewers will also get a chance to watch our beloved Dada interacting with Bengali actor Sandipta Sen and actor Mainak Banerjee. Sourav Chatterjee from the popular Zee Bangla serial Bhanumotir Khel, will also make an appearance. Last but not the least, Solanki Roy, who made us all fall in love with her in the show Jamai Raja, will also be seen participating in the various rounds, in the game show.

The promo video shows Sandipta Sen and Mainak, engaged in witty banter with host Sourav, and we can’t wait to witness the entire conversation. We bet it’ll be super fun! Stay tuned for the episode.

Rani Mukherjee Is Back On Dadagiri Again. This Time To Promote Her Movie…

For more entertainment, watch Didi No. 1 Season 8 on ZEE5.

Here's Why You Should Add Panther: Hindustan Meri Jaan's Songs To Your Music List

All The Swag You Need To Begin The Year With, Courtesy Panther Star Jeet